In hindsight, the crushing of the 1989 democracy movement was a clear indication that China’s leadership understood and rejected the cost of moving onto “the right side of history” and joining the U.S.-dominated global order, notes Orville Schell, the Arthur Ross Director of the Center on U.S.-China Relations at the Asia Society and the co-author, with John Delury, of “Wealth and Power: China’s Long March to the Twenty-First Century.” For Americans, it was a beguiling dream and expressed a genuine desire to work things out between the two countries without provoking conflict, he writes for The Wall Street Journal: 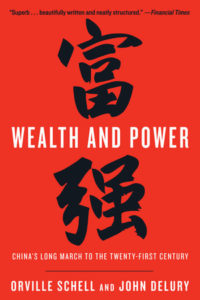 The limits of such wishful thinking have become more obvious since 2012, when Xi Jinping began his ascent to the top of the Chinese leadership. With his new Big Leader cult, disdain for democracy, authoritarian zeal and repudiation of political reform, Mr. Xi has prompted a far-reaching reconsideration among U.S. foreign policy elites, including second thoughts about the wisdom of the policy of engagement itself. Indeed, his policies—expanded party control over the economy, heightened state censorship, persecution of minorities (especially the Uighurs and the Tibetans) …

Newly published documents lay bare how after the massacre, party leaders quickly set about reinforcing a worldview that casts the party and China as menaced by malign and secretive forces, The New York Times adds:

“Kill those who should be killed, sentence those who should be sentenced,” Wang Zhen, a veteran Communist with a famously fiery temper, said of the party’s opponents, according to the collection, “The Last Secret: The Final Documents From the June Fourth Crackdown.”…“In demonizing domestic critics and exaggerating the role of foreign forces, the victorious conservatives revealed their blindness to the real problems affecting the regime,” Andrew J. Nathan, a professor of Chinese politics [and editor of The Tiananmen Papers], writes in an introduction to the documents. While the hard-line officials acknowledged public ire about inflation and corruption, they treated political demands for more open government as nothing more than a tool of Western subversion.

Chinese authorities have detained dozens of people as part of a ramped-up annual crackdown ahead of the anniversary of the Tiananmen Square massacre, The Guardian adds:

Tuesday will mark 30 years since the bloody event, which saw Chinese authorities brutally shut down long running student protests, killing thousands of people in and around the central square in Beijing. Chinese Human Rights Defenders (CHRD), a US-based organisation for domestic and international activists, said the Beijing government’s “pre-emptive strikes” against anyone who might try to mark the anniversary had started in early May.

Historian Glenn Tiffert, currently a visiting scholar at Stanford University’s Hoover Institution, says China’s leaders want to warp the historical record in order to shape the future, The WSJ adds. “By tendentiously distorting consciousness of China’s past, they are prejudicing its possible futures,” he wrote in the American Historical Review.

“The way to think about the PRC [People’s Republic of China] on the 30th anniversary of Tiananmen,” he said in an interview, “is that it isn’t just trying to bury a set of inconvenient truths and facts, but is trying to construct a new narrative.”

The Congressional-Executive Commission on China and the Tom Lantos Human Rights Commission host a congressional hearing hosted by the House Foreign Affairs Committee titled “Tiananmen at 30: Examining the Evolution of Repression in China.” On the 30th anniversary of the pro-democracy protests, the hearing will review the events in China in 1989, the aspirations of the “Tiananmen generation,” and the censorship and lack of accountability by the Chinese government. Witnesses will also examine the ways the legacy of Tiananmen has contributed to the evolution of repression in China under the leadership of President Xi Jinping and offer recommendations on how U.S. policy can effectively support the people of China.

Tiananmen at 30: Examining the Evolution of Repression in China

The Chinese government should take responsibility for the massacre of an untold number of pro-democracy demonstrators in June 1989. Authorities should cease all harassment of activists and families of victims for commemorating the occasion, Human Rights Watch said today. On the 30th anniversary of the Tiananmen Massacre, it is publishing profiles of those who have advocated for greater freedom and justice, despite extraordinary oppression over the years.

“Thirty years after the Tiananmen Massacre, Chinese authorities have not acknowledged the atrocity or provided justice for the victims and their families,” said Yaqiu Wang, China researcher at Human Rights Watch. “The whitewash of Tiananmen and heightened repression across China have fueled activists’ determination to fight for human rights.”