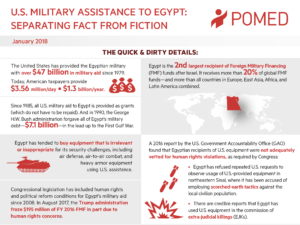 Autocratic allies in the Middle East, such as Saudi Arabia, have reportedly been told that the U.S. will not “lecture” them on democracy and human rights.

U.S. attempts to explicitly link military assistance and arms sales to a recipient country’s domestic political behavior have not borne much fruit, according to Andrew Miller,  deputy director for policy at the Project on Middle East Democracy, and Richard Sokolsky, a nonresident senior fellow at the Carnegie Endowment for International Peace. For instance, the Obama administration’s suspension of some types of military assistance to Egypt in 2013 did not lead to “credible progress” toward democratic reforms. Nor did putting a $4 billion arms package for Bahrain on hold yield an improvement in that country’s human rights environment.

If the U.S. cannot identify actions that the recipient would not have otherwise taken as a result of this assistance, then it is nothing more than a welfare program, and has two pernicious effects, they write for The American Conservative:

Libyans are still waiting for a peaceful transition seven years on from the popular uprising that toppled dictator Moammar Gadhafi, Voice of America reports. Many Libyans believe there is not much to celebrate as they are still waiting for the birth of a democratic state, VOA’s Mohamed Elshinnawi notes.

The kind of “chaos” extant in Libya is the real enemy of political progress, says Elliott Abrams, Senior Fellow for Middle Eastern Studies at the Council on Foreign Relations. A breakdown of law and order is what allows extremist groups like ISIS or al Qaida to move into the vacuum, he tells VOA Host Carol Castiel, addressing issues raised in his new book “Realism and Democracy: American Foreign Policy After the Arab Spring.”

Absent satisfying the original demands of the Arab Spring – bread, dignity, political freedom and social justice – the next wave of protests are simply a matter of time, analyst Norman T. Roule writes for Cipher Brief.

The U.S. should do more to promote democracy not only because it is a better form of governance for the Arab world but also because it is in the long-term national interest of the United States, argues Abrams, a board member of the National Endowment for Democracy.