Liberal democracy “is where the world was, not where it is going,” said US senator Daniel Patrick Moynihan. By the end of the year, we should be able to assess the veracity of his remark.

Starting with Italy’s elections on March 4, more people will vote to elect national governments over the next year than ever before in a similar time span, Ozy reports:

Seven of the world’s 10 most populous nations — India, Indonesia, Brazil, Pakistan, Bangladesh, Russia and Mexico — will pick their leaderships, as will war-ravaged nations like Iraq and Afghanistan. The countries that will vote include increasingly authoritarian regimes like Venezuela, Egypt and Russia, and nations with growing cynicism over corruption, like Brazil and Malaysia. ….With 40 percent of the world’s population heading to the ballot box, there’s more at stake than the future of these countries.

“These elections are extremely crucial for the future of democracy,” says Arch Puddington, distinguished fellow for democracy studies at Freedom House.

“Democracies may die at the hands not of generals but of elected leaders,” Steven Levitsky and Daniel Ziblatt wrote in their new book, How Democracies Die. “(These are) presidents or prime ministers who subvert the very process that brought them to power.”

The authors say scholars are increasingly concerned that democracy may be under threat worldwide, even in places where its existence has long been taken for granted, analyst Nick Miller writes for The Age:

They point to populist governments assaulting democratic institutions in Hungary, Turkey and Poland; to extremist forces shouldering their way into the political conversation in Austria, France and Germany. According to one count, between 2000 and 2015 democracy broke down in 27 countries, among them Kenya, Russia, Thailand and Turkey.

Trends in the advanced democracies are disturbing, according to indices from Freedom House and the Economist Intelligence Unit. 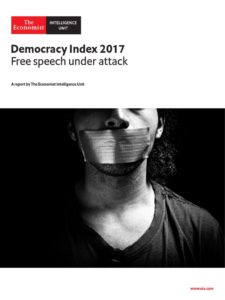 “You see it everywhere – in the UK and France and other mature democracies. The social democratic parties have particularly lost touch with their base – it’s cataclysmic.”

In his book, Enlightenment Now: The Case for Reason, Science, Humanism and Progress, The Economist notes, Steven Pinker observes that:

Two centuries ago only 1% of people lived in democracies, and even there women and working-class men were denied the vote. Now two-thirds of people live in democracies, and even authoritarian states such as China are freer than they once were. …..Without downplaying the risks [of populism], he remains optimistic. The checks and balances that populists decry are reasonably effective in most rich countries and will outlast the current crop of demagogues. Supporters of populism will become disillusioned, or will simply die off. 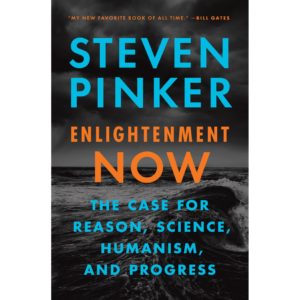 “[E]ven the apparent retreat of democracy looks different in historical context. Notwithstanding the backsliding in Russia, Turkey, and eastern Europe, the number of democracies has increased from 31 in 1971 to, at last count, 103,” Pinker writes.

There are three harms “giving the impression that we’re spiraling into disaster. That society is constantly deteriorating,” Pinker tells JSTOR

“Pinker hopes to revive the values of the Enlightenment by making a case for reason, science, progress and fact-based argument,” notes Caroline Winterer, a historian at Stanford University and the author of American Enlightenments: Pursuing Happiness in the Age of Reason. “He musters an army of numbers to vanquish a host of enemies: religion, conservatism, nationalism, tribalism, Marxism, authoritarian populism, postmodern theorists, Nietzsche and many more,” she writes for The Washington Post.

But the philosopher John Gray questions the insistence on the Enlightenment roots of liberal democracy. “The purpose of Pinker’s laborious graphs and figures is to reassure his audience that they are on ‘the right side of history’,” he writes for the New Statesman:

But nagging questions will surely return. If an Enlightenment project survives, what reason is there for thinking it will be embodied in liberal democracy? What if the Enlightenment’s future is not in the liberal West, now almost ungovernable as a result of the culture wars in which it is mired, but Xi Jinping’s China, where an altogether tougher breed of rationalist is in charge? It is a prospect that Voltaire, Jeremy Bentham and other exponents of enlightened despotism would have heartily welcomed.

According to Steven Pinker, Stanford University’s Francis Fukuyama (right) – a National Endowment for Democracy board member – has become a “punching bag” for editorialists commenting on the latest bad news, “gleefully announcing the return to history”, citing theocracy in the Muslim world, authoritarian capitalism in China, populist victories in Poland and Hungary and power grabs by autocrats in Turkey and Russia (“the return of the sultan and the tsar”, as Pinker puts it), Miller adds:

“Historical pessimists, with their customary schadenfreude, announced that the third wave of democratisation had given way to an ‘undertow’, ‘recession’, ‘erosion’, ‘rollback’ or ‘meltdown’. Democratisation, they said, was a conceit of Westerners projecting their tastes onto the rest of the world, whereas authoritarianism seemed to suit most of humanity just fine.”

But democracy’s Third Wave is “far from over, let alone ebbing, even if it has not continued to surge at the rate of the years surrounding the fall of the Berlin Wall,” Pinker contends:

In 1989 the world had 52 democracies, defined by the Polity Project as countries with a score of 6 or higher on their scale, up from 31 in 1971. This number grew in 90s, then again with the 21st century colour revolutions including Croatia, Serbia, Georgia, Ukraine and Kyrgyzstan. The total at the start of the Obama presidency in 2009 was 87, and by 2015 it was 103 – a year which saw transition to democracy in Tunisia solidified, and positive movements in Myanmar, Burkina Faso, Nigeria and Sri Lanka.

Pinker wrote in the New Republic that, having “signed on to post-modernism as an overarching philosophy,” mainstream humanities failed to define a progressive agenda.  “In that ideology [post-modernism], there is no difference between liberal democracy and fascism,” he tells JSTOR:

The institutions of modernity are responsible for horrors like racism and genocide, the pursuit of objectivity and truth are delusional, all statements are ultimately paradoxical–those beliefs sap the energy toward understanding our problems and trying to ameliorate them. As such, they don’t offer a progressive agenda for those who might want to improve society, but lead either to the sterile practice of just piling criticism on top of criticism or to radical alternatives, such as tearing down institutions, because they believe that anything will be better than what we have today.