Next February, Nigeria will hold its seventh election since transitioning to democracy in 1999. Nearly 100 million Nigerians are registered to vote, most of them under 25. By 2050, according to UN projections, Nigeria will be the third-most populous country in the world after China and 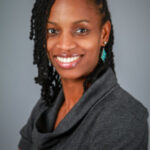 During Nigeria’s years of military dictatorships, from the late 1960s to the 1990s, the state grew progressively weaker: the civil service was systematically undermined, and the failure to diversity the economy away from extractive economic activity eroded the government’s ability to fund public investments. Now that Nigeria is a competitive, multiparty democracy, those weak institutional foundations mean the state is unable to stimulate broad-based economic growth, she writes for Foreign Affairs:

Nigeria transitioned to democracy in 1999, but many of the patterns established under military rule endured. Although they were now preoccupied with elections, political elites still focused on sharing in the spoils of central government while appeasing regional leaders of ethnic groups. To be fair, this singular focus on unity has been successful on its own narrow terms. Twenty-three years after Nigeria’s transition to democratic rule, a military coup is unthinkable and there is no real risk that the country will fracture. 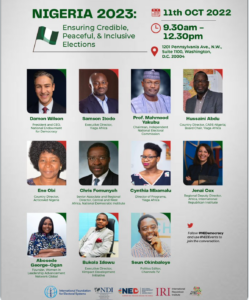 “We see the 2023 elections as an opportunity for citizens to reclaim the state,” said Yiaga Africa’s Samson Itodo. “It’s an opportunity for Nigeria to reinforce its leadership position as a bastion of hope for democracy in West Africa,” he told today’s National Endowment for Democracy (NED) forum, Nigeria 2023: Ensuring Credible, Peaceful, and Inclusive Elections (watch live above).

In less than 30 years, Nigeria will be the third highest populated country in the world, said NDI’s Chris Fomunyoh. Democrats around the world should be talking about Nigeria and its elections, he told the forum.

“Of the over 12 million new voters registered in #Nigeria since last election, 71% are ages 18-34 per @inecnigeria, underscoring younger voter mobilization since #EndSARS,” NED President and CEO Damon Wilson tweeted (below).

In the past, Nigeria’s political stability depended on the ability of its leaders to strategically distribute oil revenues, adds Anku (right), a former Penn Kemble Fellow at the National Endowment for Democracy (NED). But as the country’s oil reserves dwindle and its population expands, stability will increasingly depend on something much more difficult: broad-based growth that improves the lives of average Nigerians. To achieve that, Nigeria will need a new and more ambitious political consensus—one that transcends the trauma of a civil war that ended more than 50 years ago and that prepares the country for the next half century. RTWT

Of the over 12 million new voters registered in #Nigeria since last election, 71% are ages 18-34 per @inecnigeria, underscoring younger voter mobilization since #EndSARS ahead of #NigeriaDecides2023 #NEDevents pic.twitter.com/FkBpaZMLxj