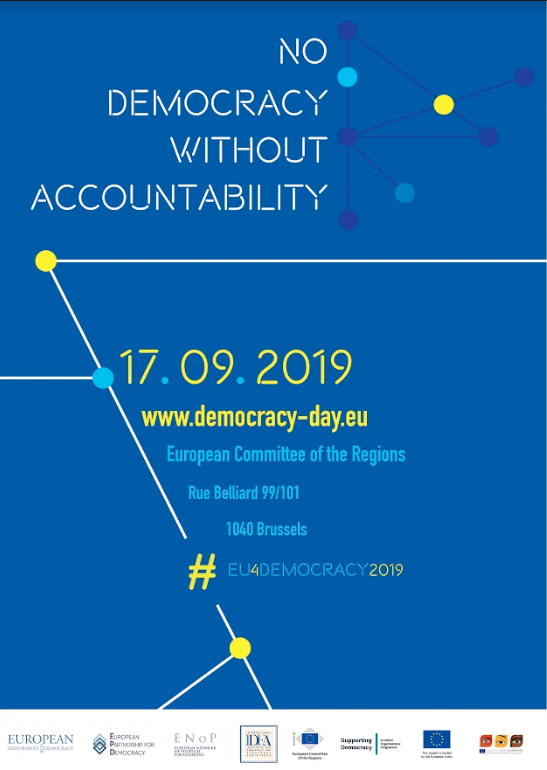 Accountability is the cornerstone of a well-functioning democracy. In a well-functioning democracy, accountability refers to all the different ways that citizens, political parties, parliaments and other democratic actors can provide feedback to, reward or sanction elected officials in charge of setting up and enforcing public policies. Proper accountability mechanisms provide incentives for governments to work in the best interest of their citizens, International IDEA reports.

IDEA’s Brussels Office  is co-organising a Conference on ‘No Democracy without Accountability‘ on Tuesday, 17 September 2019, from 09.30 to 17.30 at the European Committee of the Regions in Brussels. The conference is a yearly re-occurring event to celebrate the International Day of Democracy, together with the European Endowment for Democracy, European Partnership for Democracy, ENoP (European Network of Political Foundations), European Committee of the Regions and Supporting Democracy….

Maina Kiai, former UN Special Rapporteur on the rights of freedom of peaceful assembly and association and a prominent Kenyan human rights activist, is the conference’s keynote speaker. Kiai has spent much of his career focusing on combatting corruption, supporting political reform and fighting against impunity in his native Kenya. At the event, International IDEA will organise a workshop on ‘Using ICTs for transparency and accountability in political finance’. Speakers from Moldova, Ukraine and India will share how digital technologies are used in their countries to improve the control of money in politics. RTWT