Populist insurgencies in the world’s two oldest English-speaking democracies have exposed deep flaws in their constitutional systems. Attending to these defects should be an urgent order of business in both nations, notes William A. Galston, the Ezra K. Zilkha Chair in the Brookings Institution’s Governance Studies Program.

Despite the differences between their constitutional systems, both the U.K. and the U.S. are learning the same lesson, he writes for The Wall Street Journal:

The formal features of governmental power cannot fully define its exercise. We assume that those who hold power will wield it within certain uncodified normative limits. Yes, the British government has the power, with the queen’s assent, to adjourn Parliament. But no one imagined that a prime minister would do so for five weeks at the climax of a wrenching national debate, just as no one in the U.S. imagined that a president would declare steel imported from Canada a threat to national security.

Assuming these crises resolve with democracy intact, both countries have will have some hard thinking to do about the fundamentals of their governance, adds Galston, a former National Endowment for Democracy board member.

As much of Europe battles a rising tide of populist and nationalist sentiment, the murder of the Maltese investigative journalist Daphne Caruana Galizia offers a lesson into the future of “European values,” adds Michael Peel, author of The Fabulists: The World’s New Rulers, Their Myths and the Struggle Against Them (HT: Transatlantic Leadership Network). 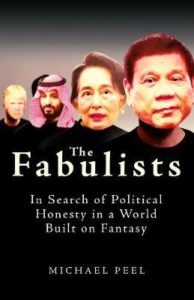 The journalist murders and the suspicions around them brutally exposed a wider cause for alarm: the deterioration of the rule of law in the EU, he writes for The Atlantic. The bloc spent a lot of time proclaiming its supposed values on human rights and democracy and urging others around the world to follow them. But what if the 28-member European club had rotted from within?

Demagogues and authoritarians are flourishing in this modern age of political myth, Peel contends. They exploit our fears and fantasies. Exposing the fictions that these new rulers use to take and keep control has never been more urgent – and people risk their careers, liberty or even their lives to do so.