Only 3% of the world’s population now live in countries where their fundamental rights are protected and respected, according to the latest CIVICUS Monitor, which rates and tracks respect for fundamental freedoms in 196 countries.

The world is becoming less free and, in Asia, almost nobody lives in a country where civil rights are not being eroded or repressed. The report, People Power Under Attack, says across Asia those freedoms are being quietly eroded, or explicitly repressed, in almost every country.

Twice as many people live in repressed countries compared to a year ago, the report found: 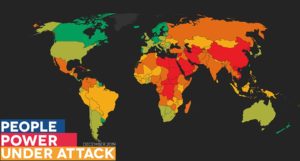 Civicus, an international alliance of civil society organisations, downgraded India’s civic space rating from “obstructed” to “repressed” in its new People Power Under Attack report, citing extreme concern about the crackdown on human rights activists, attacks on journalists and civil society groups, and the lockdown in Jammu and Kashmir.

“The Modi government seems to be turning its back on civic freedoms by going after its critics including activists and journalists,” said Josef Benedict, a CIVICUS researcher. “The deterioration of India’s civic space is alarming – particularly its assault on freedom of expression using an array of restrictive laws – and its attempts to impede human rights groups.” 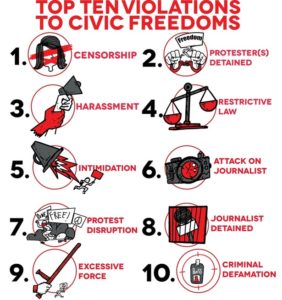 Even Europe, the world’s most liberal region, registered no major improvements in democratic and political freedoms in the last year, according to the report. The EU still includes the highest number of open countries (14), thirteen of them experienced “narrowed” liberties and one where freedom and civic pace are “obstructed” (Serbia).

The full CIVICUS Monitor report can be accessed here.