The United States will bar two Venezuelan officials accused of human rights violations from traveling to the U.S. in its latest action to pressure Venezuela’s President Nicolas Maduro into stepping down. An international conference in Peru will address the campaign to effect a political transition, Reuters reports (HT; FDD).

The U.S. special representative for Venezuela, Elliott Abrams (above), says Canada and the U.S. are strategizing on how to move the European Union toward imposing sanctions on the Maduro regime ahead of the international forum.

Having failed so far to dislodge the Maduro regime, opposition leader Juan Guaidó and his backers in Washington, Europe and Latin America face difficult questions, The Financial Times reports:

Although he remains by far Venezuela’s most popular politician, it is not clear how long Mr Guaidó can keep his fractious opposition coalition together and his supporters enthused. For the Trump administration, the issue is whether it now needs to start thinking about a plan B for Venezuela. And while the political stalemate in Caracas drags on, the implosion in the economy and the humanitarian disaster is only gathering pace.

“Venezuela is in a state of perverse equilibrium,” says Luis Vicente León, director of Datanálisis, a polling and market research firm in Caracas. “We are in a catastrophic deadlock where neither side can defeat the other but their conflict can destroy the country.”

The tragedy in Venezuela is an opportunity for Colombia, the United States, and other countries in the region to lead a historic response, adds Global Americans director Chris Sabatini. This collaboration would work across all the sectors of the relationship, including diplomatic, security, academic, and economic. In this, SouthCom can play an active role in both assisting in the logistics of the delivery of assistance but also in working with counterparts in-country to ensure the security of the areas where assistance is delivered, he contends. RTWT

There are two scenarios for Venezuela, says Moisés Naím, a former National Endowment for Democracy board member who was a Venezuelan minister in the 1990s.

“One is that the current situation becomes permanent . . . The stalemate continues and you have Libya on the Caribbean, a nation with two rival governments each supported by a different international coalition.” He adds: “The other scenario is some kind of imperfect, hard-to-swallow agreement for elections and the elections taking place.”

The opposition and Maduro regime are expected to resume Norway-brokered negotiations soon in Barbados, The Wall Street Journal adds, in an effort to resolve the country’s political and economic crisis, Carlos Vecchio, Mr. Guaidó’s top envoy to Washington, said this week. Mr. Guaidó’s negotiators are pressing Mr. Maduro into accepting to hold a new presidential election, which he has so far rejected, people familiar with the talks said.

Research confirms a decrease in political liberties and growing attempts by the government to repress Venezuela’s civil society.

By using its Country Radar Chart tool (below), V-Dem (Varieties of Democracy) has observed changes in several indicators concerning Venezuelan civil society and democracy between 2013 and 2017:

The civil society organization (CSO) anti-system movements indicator measures the existence of opposition movements and the level of possible threats it represents to the regime, while CSO repression refers to attempts to repressive actions from the government—with higher numbers indicating less repression. The political civil liberties index aims to measure the level of respect for political liberties, namely freedom of association and expression, scaled from low to high.

Guaidó insists that the campaign of non-violent protest will succeed.

“If we look at it rationally and do a checklist . . . of all the elements needed to substitute a dictatorship and have a transition: popular support, institutional support, access to resources . . . international support, the state of the armed forces, capability to mobilise . . . well, we have them all, or the majority of them,” he tells the FT. RTWT 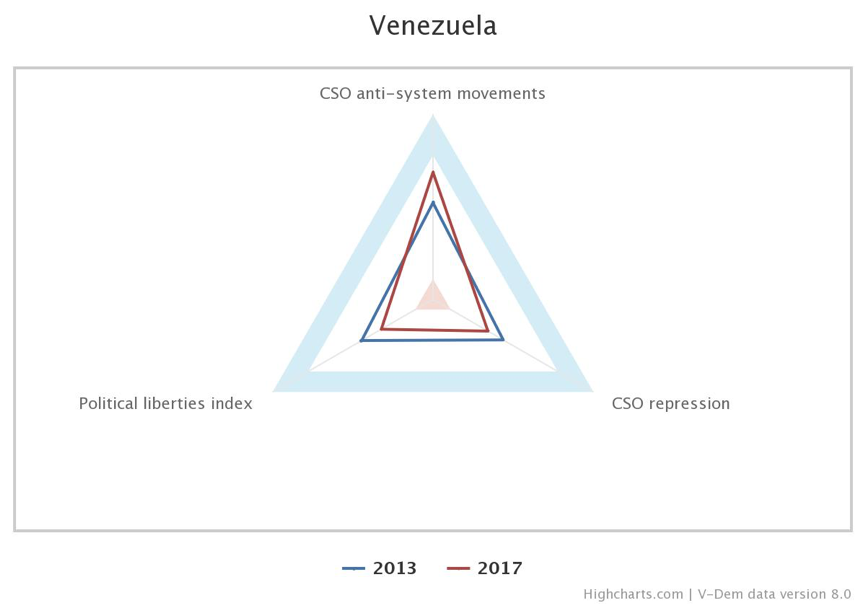