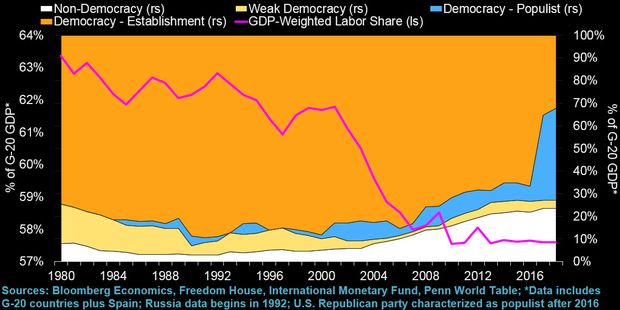 In the Group of 20, just 32 percent of gross domestic product is controlled by mainstream democratic parties, down from 83 percent in 2007. Over the same period, the power of populist parties’ has surged to 41 percent of GDP from 4 percent. Non-democratic regimes: China, Russia, Saudi Arabia and Turkey are now managing 24 percent of the G-20’s GDP; indeed China accounts for almost 19 percent, according to Tom Orlik at Bloomberg Economics. 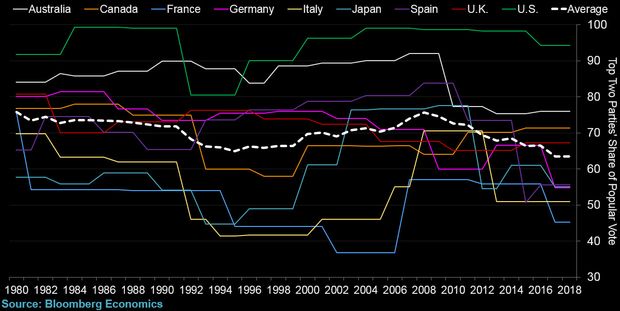 “That’s a significant shift in the way the world economy is run,” Orlik and Associate Economist Justin Jimenez said in a Global Insight article Tuesday. Some aspects of good governance are more important for growth than others, Orlik said, adding this may be uncomfortable for democracy advocates:

High-quality regulation and government effectiveness correlate more closely with growth than democratic values like voice and accountability. Looking at the G-20 in those terms, the trajectory on governance looks less alarming. Democratic standards are deteriorating, but quality of regulation and government effectiveness are more stable, even edging up in recent years.

But, Orlik adds, government effectiveness and high-quality regulation are tough to maintain in the absence of policy debate and accountability for leaders. So he remains skeptical that the new rulers of the world’s major economies will be able to decouple long-term growth from the institutions that underpin good governance. RTWT