In less than two weeks, Venezuela will conduct the latest in a series of sham voting exercises, this time to hand a new mandate to President Nicolás Maduro, note Arch Puddington, Distinguished Fellow for Democracy Studies at Freedom House and Isabel Linzer, Research Associate with Freedom in the World. Over the past two months, similar pseudo-elections were held in Russia, Azerbaijan, and Egypt. In each case the outcome was determined far in advance, with nothing left to chance. And in each case, the official result was a massive win for the incumbent strongman: over 76 percent for Russia’s Vladimir Putin, 86 percent for Azerbaijan’s Ilham Aliyev, and a whopping 97 percent for Egypt’s Abdel Fattah al-Sisi, they write:

Avoiding the oppressive methods of dictators past was once a key goal for modern authoritarians, who hoped to camouflage their monopoly on power with a veneer of order, pluralism, and electoral legitimacy. The question we need to ask is whether the current trend of open violations of the most basic standards for competitive elections is a sign that autocrats no longer care what the world thinks, a reflection of growing apprehension about the stability of their regimes, or some combination of the two. RTWT 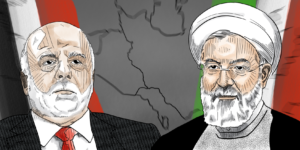 Tehran’s real influence is behind the scenes. For example, the commander of the IRGC’s elite Qods Force, Qassem Soleimani, has not only advised Iraqi armed groups. He has also brokered political alliances, says Abouaoun:

Now that Iran has many points of leverage in Iraq, it may not intervene as overtly to support a candidate for prime minister in 2018. Iran does not want Iraq to fall into a civil war, and it does not want a polarizing figure to become prime minister. Therefore, Prime Minister Haidar al Abadi may still have a shot at keeping his job, as his weakened position could make him less of a threat to the Iranian influence in Iraq. Tehran can benefit from someone like Abadi, who can engage with the international community and maintain relations with Sunni Gulf states.

Corruption and security are the key issues in the 2018 Mexico Elections, argues Matt Lawson, Senior Program Associate for Latin America and the Caribbean at the International Republican Institute:

According to the most recent Corruption Perceptions Index published by Transparency International in 2017, Mexico ranked number 135 out of 176 countries. This number highlights the need for the government to continue to improve accountability and increase citizen oversight and transparency to prevent embezzlement, illegal use of public funds, and other forms of corruption that have sullied Mexican politics. The continued presence of corruption at all levels of government has caused the Mexican public to advocate for increased accountability and a change to the status quo of impunity.