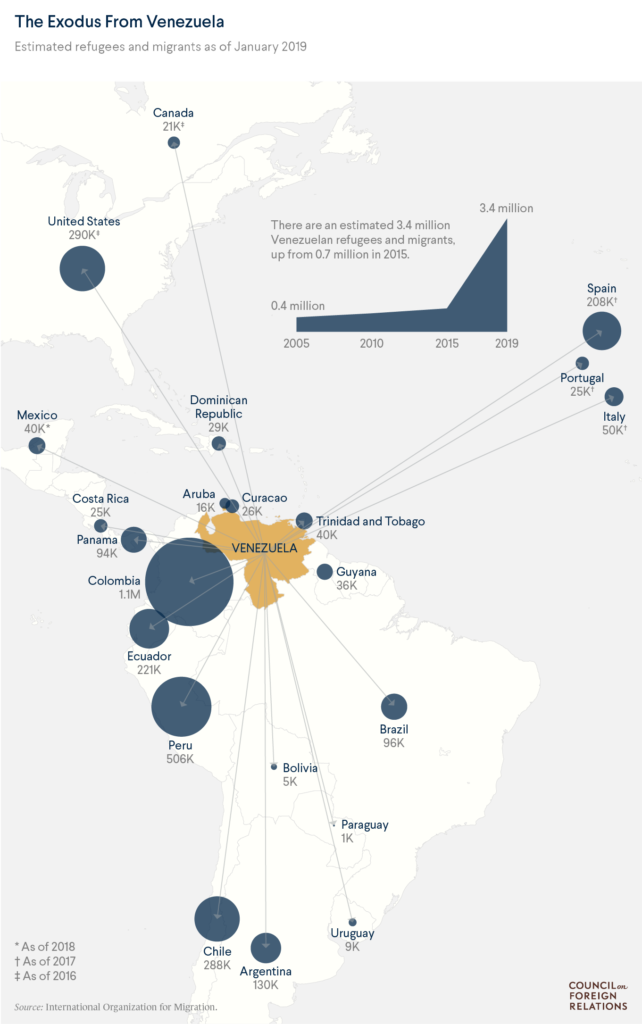 USNS Comfort, a military hospital ship, will begin a five-month deployment in June to provide care for Venezuelan refugees (Miami Herald) across Latin America. Washington will consider lifting sanctions (NYT) on top Venezuelan military officials who break with President Nicolas Maduro (HT: CFR, which maps the exodus from Venezuela – above).

Venezuela is in the midst of an unprecedented political and economic crisis, the effects of which are rippling across the hemisphere and beyond, CFR analysts Rocio Cara Labrador and William Merrow add:

Wracked by hyperinflation, severe food and medicine shortages, soaring crime rates, and an increasingly authoritarian executive, more than 2.7 million Venezuelans—approximately 9 percent of the population—have fled the country in the past four years. Some four hundred thousand have claimed asylum from political persecution and violence, and another million have gained other forms of residency.

Spain is increasingly taking center stage in Venezuela’s crisis as talks to get president Nicolas Maduro to resign appeared to collapse and its embassy in Caracas gives refuge to Leopoldo Lopez, the opposition leader who escaped house arrest and led an abortive military rebellion last week, VOA’s Martin Arostegui reports:

Involving Spain in schemes to manipulate Maduro into stepping down may have prompted what some analysts say was a premature revolt by regime opponent backed by soldiers who believed Maduro’s defense minister and other key aides were ready to abandon him. …..U.S. Special Envoy for Venezuela Eliott Abrams has tried to use Spain’s influence with the Venezuelan government to bring about the bloodless collapse of Maduro’s rule, among other things by getting Spain to receive Maduro allies who opt to leave Venezuela as part of a transition.

The current situation makes it hard to predict what happens next, argues Benigno Alarcon, director of the center for political studies at Andres Bello Catholic University.

The most credible explanation for the failure of the plan has to do with divided objectives, The Wall Street Journal’s Mary Anastasia O’Grady contends:

Mr. Guaidó envisions democracy. The Padrino crowd wants to preserve the command structure it enjoys, hang on to its bank accounts, and not be held accountable for its crimes against humanity or its corruption. The only thing the two sides have in common may be the shared goal of getting rid of Mr. Maduro. But Mr. Padrino, who is notoriously close to the Kremlin, won’t do it at any cost.

Days ago Juan Guaidó was on the streets of Caracas calling the “final phase” in his attempts to oust Venezuela’s Nicolás Maduro. This attempt, termed a “coup” by the Maduro government, failed. Now what? Guaidó spoke to the BBC’s Nick Bryant.

Mr. Guaidó and Mr. Maduro appear to be locked in an epic battle for the support of the armed forces, but the situation is more complicated than that, say the Inter-American Dialogue’s Michael Shifter* and Bruno Binetti. To be sure, the armed forces will have to decide whether it is time for Mr. Maduro to go and, if so, negotiate the terms of his departure. But a government absent Mr. Maduro does not necessarily mean an embrace of Mr. Guaidó or a shift to democratic rule, they write for the New York Times:

Instead Venezuela could face either a relatively long transition under military rule, lasting until the armed forces are convinced that a return to democracy will not jeopardize their power and privileges, or a hybrid military-civilian regime in which Mr. Guaidó and other opposition leaders will share power with military leaders accused of serious crimes. This prospect is undoubtedly discouraging. But once transitions begin, they tend to acquire a life of their own.

“The apparent unity of the [Venezuelan] upper command despite three visible calls by Guaido to abandon Maduro since January raises significant questions about the reasons for his [Guaido’s] apparent overconfidence,” Jennifer McCoy, a Latin American expert at Georgia State University, told The LA Times.

Speaking to The Guardian, David Smilde a Venezuela expert at Tulane University said: “Clearly this was a failure in the sense that this left the opposition weaker than they were before.”

The operation to remove Maduro reportedly had the backing of defense minister, Vladimir Padrino López; the president of the Supreme Court, Maikel Moreno; the boss of the intelligence service, Manuel Cristopher Figuera; and the head of military counterintelligence, Iván Hernández Dala.

Whatever happens, more talks will have to take place, FT analysts suggest. The alternatives are a deepening stalemate, a growing social toll and the increased likelihood of massive bloodshed. As the International Crisis Group, a non-profit organisation, said this week, if the choice in Venezuela is between deadlock or talks, “it should not be a difficult choice.”

The Maduro regime, with help from Russia among others, is resisting the efforts using tactics of classic hybrid warfare, which combines physical force – such as suppressing protests – with more insidious tactics such as online information warfare, DFRLab adds:

Over the past few months, the DFRLab has written a number of pieces that cover the disparate tactics of the Maduro regime’s information war. Just this week, the DFRLab exposed a coordinated campaign by regime-affiliated civilian militias to promote pro-Maduro hashtags on Twitter, an operation that in a lot of ways mirrored an earlier automated amplification scheme. In an earlier instance, a webpage designed to phish highly valuable personal details of Guaidó supporters resulted in the publication of that same sensitive data onto the open internet. Maduro himself has also promoted disinformation, especially around the involvement of the United States, which remains a favorite and useful target.

Inter-American Dialogue hosts a discussion on “Corruption, Criminality and Justice in a Post-Transition Venezuela.”