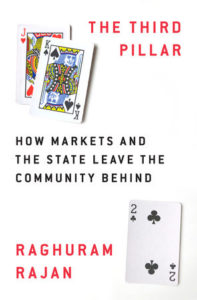 Both the ethnic nationalist and socialist variants of populism threaten the delicate balance between markets and the state, and that will put an end to both prosperity and democracy, argues Raghuram G. Rajan, Governor of the Reserve Bank of India from 2013 to 2016, Professor of Finance at the University of Chicago and the author, most recently, of The Third Pillar: How Markets and the State Leave the Community Behind.

The right response is not revolution, but rebalancing, he writes for Project Syndicate:

Capitalism needs top-down reforms, such as updated antitrust regulation, to ensure that industries remain efficient and open to entry, and are not monopolized. But it also needs bottom-up policies to help economically devastated communities create new opportunities and maintain their members’ trust in the market economy. Populist criticism must be heeded, even if the radical proposals of populist leaders are not followed slavishly. This is essential to preserving both vibrant markets and democracy.

The populist uprisings in the US and throughout Europe are not the cause of the West’s crisis of governance, but, rather, have exposed the ways in which liberal democracies have failed their citizens by failing to address the dislocations of globalization and the disruptions of technological change, argue Nathan Gardels and Nicolas Berggruen, co-founders of the Berggruen Institute, Neither establishment nor populist leaders have proposed any systemic solutions, so governments have become further polarized and paralyzed, compounding the problem.

A fresh restructuring of democratic governance frameworks would guarantee adequate living conditions for workers regardless of employment status – think of it as “universal basic capital instead of universal basic income,” Berggruen tells the blog ScheerIntelligence.

In Renovating Democracy: Governing in the Age of Globalization and Digital Capitalism, Gardels and Berggruen argue that the rise of populism in the West, of China in the East, and the spread of social media, has prompted a deep rethink of how democracy works—or doesn’t.

On Monday, May 13th at 12pm, Gardels and Berggruen, discuss their new book, Renovating Democracy: Governing in the Age of Globalization and Digital Capitalism (University of California Press; April, 2019), with Laura Tyson, Distinguished Professor of the Graduate School at the Haas School of Business & Faculty Director of the Institute for Business & Social Impact. For more information, click here.