Colombia’s President-elect Ivan Duque (left), who swept aside leftist Gustavo Petro in Sunday’s election, pledged to unite his South American nation after a divisive campaign but insisted he would change a landmark peace accord with leftist rebels, Reuters reports:

Duque’s decisive victory in Sunday’s poll, with 54 percent of votes to Petro’s 42 percent, is likely to reassure investors in Latin America’s fourth-largest economy who were alarmed by the leftist candidate’s promise to overturn Colombia’s orthodox economic model.

Yet, in the first presidential election since the 2016 peace deal with the Revolutionary Armed Forces of Colombia (FARC), Duque worried Colombians with a promise to overhaul the accord that ended a five-decade conflict which killed more than 220,000 people and displaced millions. He has promised to impose tougher punishments on rebels for war crimes. 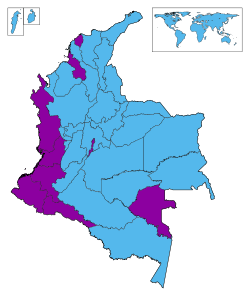 “The biggest challenge will be to adopt a clear position on the peace agreement because, for the moment, we are in limbo,” Fabian Acuna, professor of political science at Colombia’s Javeriana University, told AFP. “It will be very costly to go backwards,” Acuna warned.

According to Andres Ortega of National University, Duque will “arrive with a very strong coalition in Congress,” where the right swept the polls in March legislative elections.

The question facing Duque will now be how much, if at all, he can emerge from former president Alvaro Uribe’s shadow — and resist calls from some in his base to completely break with the peace accord, the Washington Post adds.

“Duque’s style is pragmatic,” said Michael Shifter, president of the Inter-American Dialogue, a Washington-based think tank. “He does have the ability to overcome some of the divisions in the country, but if he goes forward in rolling back significant aspects in the peace accord, that could create more tension, more division,” said Shifter, a former program officer at the National Endowment for Democracy.

In the run-up to the vote, Colombian society, especially organized civil society such as human rights organizations, universities and local communities called urgently for the state to disseminate and explain the accords so people could vote in an informed manner, said analyst Gwen Burnyeat. This demand was even enshrined into law by the Constitutional Court, which ruled the state had “the duty to inform citizens in an objective, impartial and sufficient way on the issue they are going to decide about” in order to uphold “the right to information,” she writes for the Conversation.