Russian President Vladimir Putin denied the government’s involvement in the poisoning of opposition leader Alexey Navalny, saying Russian authorities would have “finished the job” had they been involved. Earlier this week, an investigation by journalists found that Russian agents trained in using chemical weapons had followed Navalny, RFE/RL reports (HT: CFR).

Navalny’s revelations that then-prime minister Dmitry Medvedev owned undeclared palaces and yachts presaged his resignation. Russian reporters even broke the news about the St. Petersburg “troll factory” interfering in the 2016 U.S. election. One of the reporters who broke that story, Andrey Zakharov, also led the reporting on the Russian president’s suspected ex-lover, Adam Taylor writes for the Washington Post (HT: FDD). 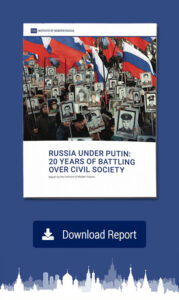 Performances by artists and activists on political topics have been a sensitive spot for the Russian authorities for years. But as the authorities’ crackdown on civil society intensifies, so does the creative non-violent response exposing and drawing attention to it, says Damelya Aitkhozhina, Russia researcher for Human Rights Watch.

In 2005, Putin famously said that the Soviet collapse represented the greatest geopolitical disaster of the twentieth century; less remarked on was his later observation that anyone wishing to restore it lacked a brain, adds Center for Strategic and International Studies analyst Jeffrey Mankoff. As Eurasian geopolitics becomes increasingly complicated by the expansion of Chinese power, growing Turkish assertiveness, and questions about the durability of U.S. commitments, Russia’s ability to adapt and thrive should not be underestimated.

An explosive report tying the Kremlin to the poisoning of Navalny raises real questions about Russia’s government and security services, the Atlantic Council reports. Why does the Kremlin see him as such a threat, and what does a recovered Navalny mean for the future of Russian politics?