Qatar is hardly the first state to brandish sportswashing as a form of reputation-laundering, notes Sarath K. Ganji, a Penn Kemble Fellow at the National Endowment for Democracy and a former U.S. Fulbright Scholar based in the Arabian Gulf.

The Gulf state, however, has proven itself among sportswashing’s ablest practitioners. Democratic actors would do well to remember this as the World Cup comes and goes. Qatar’s laundering—and the example it sets for other authoritarian regimes—is certain to endure, he writes for the Journal of Democracy: 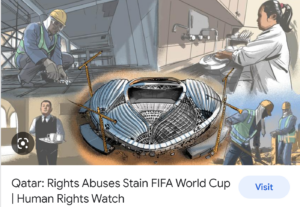 Qatari authorities updated the terms of the permits that they issue to international film crews, barring them from recording at government buildings, universities, and labor camps. Interviewing exploited migrants has become that much more difficult. However, it appears that Qatar’s cup may be triggering what political scientist Victor Cha calls the “Olympic catch-22,” wherein sporting events like the Olympics spotlight the unflattering side of closed societies. Sportswashing, in other words, is not necessarily the boon it is made out to be.

Qatar’s human rights record is patchy. A democracy in name only, the country is ruled by the autocratic Al Thani dynasty, which imprisons LGBTQ people who engage in consensual sex, the Post adds:

The UK’s indefatigable human rights campaigner Peter Tatchell was kicked out of the country last week after he mounted a one-man demonstration outside Qatar’s National Museum. On German television last week, Qatar’s official World Cup ambassador Khalid Salam chose that moment to call homosexuality a form of “damage in the mind.”