Western countries must be careful not to create new dependencies on China as they are weaning themselves off Russian energy supplies amid Moscow’s war on Kyiv, NATO chief Jens Stoltenberg warned on Monday, Reuters reports.

“We cannot give authoritarian regimes any chance to exploit our vulnerabilities and undermine us,” he said.

Let’s hope Croatia gets the message.

Financed by the EU, the construction of the Pelješac Bridge in Croatia has been a resounding success for Chinese soft power, notes analyst Allison Carragher, citing the PRC’s unfair economic practices, environmental and labor shortcomings, and interference in European democracies.

Notably, the PRC’s soft-power gains were achieved on the EU’s own dime. It is not in the EU’s interest to bankroll the economic and soft-power ambitions of its systemic rival, she writes for Carnegie Europe.

Xi Jinping should consider that far from allowing him to lead his party and his country through treacherous times, unchecked power could breed internecine strife and hinder effective governance, says Claremont McKenna College professor Minxin Pei.

Far from guaranteeing another decade of success as China’s dominant leader, Xi’s triumph [at the recent CCP Congress] is likely to usher in a period of political rivalry among his own loyalists who are eager to seek his favor and gain an edge in the inevitable struggle for succession, he writes for Foreign Affairs. 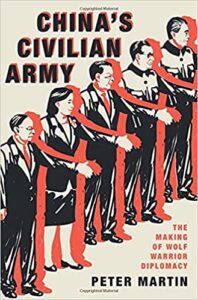 TV cameras caught a heated exchange as Chinese leader Xi Jinping criticized Canadian Prime Minister Justin Trudeau at the G-20 summit on November 16. Just a week after Trudeau had publicly decried Chinese interference in Canadian elections, Xi’s consternation suggests he did not know of this and expected Trudeau to keep it a private matter, notes Sinologist Ben Lowsen.

China’s diplomats – aka Wolf Warriors – have displayed a similarly pugilistic tone in recent years, outdoing themselves to please Xi, he writes for the Diplomat:

Historian Roderick MacFarquhar labeled a similar phenomenon during the Mao era as “working toward the Chairman.” In a recent essay, Chinese Foreign Minister Wang Yi described this as “great power diplomacy with Chinese characteristics,” exhorting diplomats to “carry forward the spirit of struggle,” “demonstrate a will and determination that fears no power,” and “resolutely counter any erroneous acts that infringe on our sovereignty.”

Nor will Xi’s political dominance guarantee the success of policies urgently needed to meet the needs of the population and U.S.-Chinese strategic competition, adds Pei, a National Endowment for Democracy (NED) board member. Xi has amassed coercive power that may make him all but invulnerable inside the regime, but this power is of limited use when seeking to reinvigorate economic growth, promote technological self-sufficiency, and address the looming demographic catastrophe.