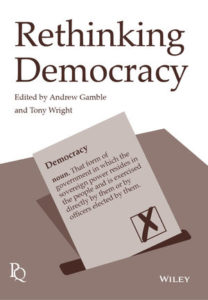 Democratic politics is under attack – this time from populist nationalists, authoritarian regimes and new forms of political communication. It was not meant to be like this, according to Rethinking Democracy, a new collection of essays edited by Andrew Gamble and Tony Wright, which suggests ways democracy might be renewed, extended and deepened.

At a time of “democratic despair,” citizens need a feeling that democracy can deliver after a long period of it failing to do so, Wright contends. Democracy is not just a matter of institutions, it is a way of doing politics – a culture and a spirit. The culture and spirit now is nasty and a return to civility is required.

The 115th American Political Science Association Annual Conference theme – “Populism and Privilege” – will highlight the self-identified populist movements around the globe, whose main unifying trait is their claim to champion the people against entrenched elites, Gabriella Baldassin writes for the OUP blog.

Recent scholarship raises vital questions about whether some or all of these self-labeled populist movements represent understandable, legitimate responses to entrenched, self-serving privileges and perspectives of global and national elites or whether they instead represent efforts to preserve privileges of established groups against economic, demographic, and cultural transformations, she observes, including:

Populism and Liberal Democracy: Takis Pappas’ book offers a comprehensive theory about populism during both its emergence and consolidation phases in three geographical regions: Europe, Latin America and the United States.  If rising populism is a threat to liberal democratic politics it is only by answering the questions it posits that populism may be resisted successfully.

In both Eastern and Western Europe, social-democratic parties have shifted to the center on economic policy, not only sapping the electoral strength of these parties, but also opening up political space for the populist right, according to Berman and Maria Snegovaya . The transition out of communism in Eastern Europe created winners and losers, they write for the NED’s Journal of Democracy…RTWT