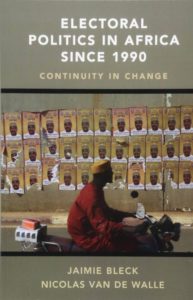 wHY, according to Jaimie Bleck and Nicolas van de Walle’s new book, “Electoral Politics in Africa Since 1990: Continuity in Change,” Instead, elections are political moments of greater uncertainty and heightened attention to politics. In some cases, these moments can lead to change, including greater democracy.

To be sure, incumbent presidents such as Peter Mutharika and Macky Sall have a significant advantage in elections. The most obvious campaign advantages are the state resources and media dominance that incumbents enjoy, particularly in countries where reaching voters in remote areas can be difficult and expensive. Still, sometimes incumbents lose. RTWT 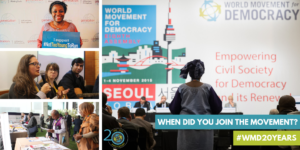 The World Movement for Democracy is calling lawyers and civil society members based in West Africa: Robert F. Kennedy Human Rights and the Open Society Justice Initiative are accepting applications for a legal workshop on civic space —also called a “litigation surgery”— until August 11, 2019. The litigation surgery “is aimed at considering key issues implicated in protecting civic space. . . [and] looks to support and strengthen either existing or proposed cases that are focused on defending these rights.” The litigation surgery will be held from September 25-27, 2019, in Abuja, Nigeria. Up to eight participants of the litigation surgery will have their airfare, visas, local transportation, and accommodation costs covered, and be provided with a reasonable per diem for other expenses. Interested applicants can learn more and apply here.