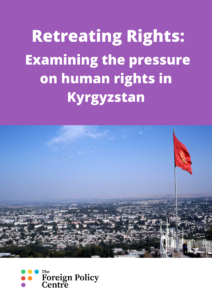 Kyrgyzstan’s civil society has been under increasing pressure throughout the last decade, requiring a root and branch rethink of donor initiatives to take stock of the situation and devise new forms of assistance, says a new report from the London-based Foreign Policy Centre.

Magnitsky sanctions and global anti-corruption measures can be used to respond to the ways corrupt elites have stashed their earnings abroad and they can also be used to seek redress where justice is unlikely to be served in Kyrgyzstan, such as in the tragic case of Azimjan Askarov. There is scope to better condition potential trade, aid and investment incentives to human rights benchmarks, editor Adam Hug suggests.

The FPC project on Retreating Rights: Examining the pressure on human rights in Kyrgyzstan, Tajikistan and Kazakhstan, is funded by the National Endowment for Democracy (NED). 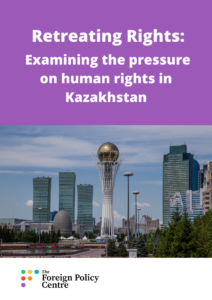 In Kazakhstan, the gradual passing of the torch from First President Nazarbayev to President Tokayev, growing social protests as living standards have been squeezed for many, and an uncertain future that lies ahead given the global move away from fossil fuels, make it an important time to take stock of the current state of human rights and governance in Kazakhstan, the FPC suggests.

Tajikistan finds itself close to the bottom of the global freedom rankings for political competition, civic space, media and religious freedom as the regime has effectively deployed its multi-track ‘suppress, acquiesce and incorporate’ approach to neutralise alternative voices with a widespread culture of self-censorship, the FPC asserts. There are real challenges deciding whether, when and how to engage with the country, which come with difficult trade-offs for those involved, where development and human rights imperatives do not always align in the short-term. 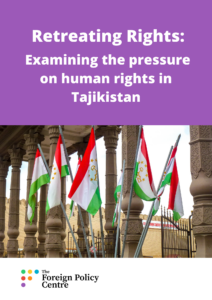 NED projects in Tajikistan include Supporting Independent Media via the Bureau on Human Rights and Rule of Law; in Kazakhstan, priorities include Defending Freedom of Peaceful Assembly in collaboration with the International Bureau of Human Rights and Rule of Law; while in Kyrgyzstan, the NED also funds its core party institutes, supporting the International Republican Institute (IRI) in its work on Local Political Communication and Campaigning with political parties and civil society groups in Kyrgyzstan’s urban areas, and with the Emerging Women Leaders Program of the National Democratic Institute for International Affairs (NDI) which aims to change negative perceptions of women’s capabilities by equipping women with the skills, experience, and political connections to engage in and lead decision making.