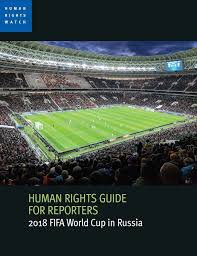 The FIFA World Cup starting on June 14, 2018, will take place during the worst human rights crisis in Russia since the Soviet era. FIFA should use its leverage with the Russian authorities to address labor rights abuses, restrictions on fundamental freedoms, and an ongoing crackdown on human rights defenders, Human Rights Watch said today:

The backdrop to the tournament, which takes place over a month in 11 Russian cities, is a harsh and deteriorating environment for human rights, Human Rights Watch said. The authorities routinely use restrictive legislation to stifle freedoms of assembly, association, and expression. Government officials crackdown on dissent by enforcing repressive laws and increasing online censorship….. In a June 2017 report, Human Rights Watch published its findings on labor abuses against workers on World Cup stadium construction sites, including wage delays, unsafe working conditions, and worker deaths….

FIFA confirmed Grozny as the base camp where Egypt’s national team will train during the tournament. Grozny is the capital of the Chechen Republic, Russia’s most repressive region. Oyub Titiev, Chechnya director of leading Russian rights group Memorial, remains in custody there on bogus marijuana possession charges.