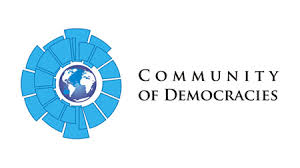 Ever since the fall of the Berlin Wall, policy experts have explored ideas for making cooperation among democracies a more integral part of US foreign policy, the Atlantic Council’s Edward Fishman and Chatham House analyst Hans Kundnani observe. In the final year of Bill Clinton’s presidency, Secretary of State Madeleine Albright convened a group of 106 foreign ministers in Warsaw to launch the Community of Democracies, an intergovernmental coalition that still exists.

However, although well intentioned, its sprawling membership which includes several countries with lacklustre democratic credentials has hampered its effectiveness. Guatemala and Hungary, both ranked just ‘partly free’ by Freedom House, sit on the Community of Democracies’ 31-member governing council, whereas Australia, France, and Germany do not, they write:

But what has changed is that those older ideas emerged when many believed that the West’s own political and economic development was complete, and all that remained was to reshape the rest of the world in its own image. Since around 2016, vulnerabilities have become increasingly apparent and foreign policy analysts have increasingly focused on external threats to democracies – especially the issue of foreign interference in national elections. The idea of a coalition of democracies has re-emerged, but this time – rather than spreading democracy – it would aim to defend democracy against threats from authoritarian states.

Consequently, the original concept for such a coalition “should be turned on its head and reinvented for a time in which we are more modest and aware of the problems in our democracies,” they contend. “It makes sense for democracies to cooperate but, instead of focusing primarily on external threats, they should focus on the internal problems they jointly face as democracies.”

Autocrats around the world reveled in the mayhem that broke out in the U.S. Capitol on January 6: an incompetently governed United States, at odds with itself, would surely be at pains to assert its leadership of a free and open international order, adds International Republican Institute President Dan Twining.

On closer inspection, however, authoritarians have little to celebrate. The events in the United States demonstrated that democracies are self-correcting and resilient because they vest power in institutions, not in rulers. Rather than yield to the political violence of a fringe minority, representative institutions upheld the will of a majority of American voters, he writes for Foreign Affairs.