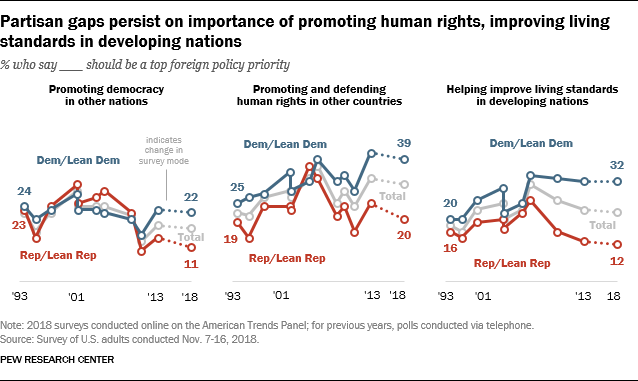 It would be wrong to conclude that recent events mean that the United States has somehow lost its standing to speak up for democracy and human rights globally, says a leading analyst.

Writing in Foreign Policy, Emma Ashford, a senior fellow at the Atlantic Council, argued, “Ambitious foreign-policy goals are completely out of step with the realities of the country’s domestic political and economic dysfunction … How can the United States spread democracy or act as an example for others if it barely has a functioning democracy at home?”, while Richard Haass, the president of the Council on Foreign Relations, lamented on Twitter that “it will be a long time before we can credibly advocate for the rule of law” overseas, notes the Brookings Institution’s Thomas Wright.

Repairing democracy at home is not incompatible with standing up for democracy abroad; they are mutually reinforcing. The threats to democracy are not unique to the United States. Trumpism is part of a global nationalist-populist movement that benefits from international networks of kleptocracy, disinformation, and corruption, he writes for the Atlantic:

Many of the long-term threats to democracy—disinformation and the lack of an objective truth, political interference by China and Russia, inequities in the global economy, and fears about interdependence and globalization—can only be addressed collectively. And American allies still want the country’s help. Allied officials have told me in recent days that although they are worried about what’s happening in the United States, they would regard it as a “disaster” if the U.S. abandoned its leadership role in strengthening liberal democracy globally.

“To insist that we must first ‘get our house in order’ before speaking to others’ oppression, to be so ashamed by our own shortcomings that we refrain from calling out abuses abroad, and thus to withhold our solidarity from the abused, would itself be an act of moral abdication,” his Brookings colleague and former Obama-administration official Tamara Cofman Wittes has observed.

It is precisely because American democracy is under pressure at home that the U.S. government ought to stand up for it overseas, adds Wright, the author of All Measures Short of War: The Contest for the 21st Century and the Future of American Power.

Nor is Europe immune to political pathologies.

The nearest Europe has to the American situation, in which conspiracy theorists are actually in charge of a government, is probably Poland, where the arrival of Law and Justice in power has seen a serious erosion of democratic safeguards in Poland, prompting action from the rest of the EU, adds FT analyst Gideon Rachman:

Far-right extremism, stoked up on the internet, led to the murder of Jo Cox, a Labour MP, during Britain’s Brexit campaign. Neil O’Brien, a Conservative MP who has spent much time battling lockdown sceptics online, warns that dangerous political fantasies, including QAnon, are spreading fast in the UK, fuelled by a “combination of social media and mainstream media prepared to flirt with the extremes”. The disorientation of the Covid-19 lockdowns has increased the number of people with little to do but surf the internet for explanations for the crisis — making them susceptible to radicalisation.

The ludicrous nature of these conspiracy theories makes it tempting to dismiss their exponents as fringe crackpots, who will never have real influence. But, as events in Washington have demonstrated, they can win the adherence of millions of people — and become a danger to democracy, he observes. 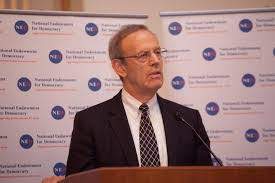 Democracy advocates were “appalled by the violent and seditious assault at the United States Capitol,” said Carl Gershman, (right), President of the National Endowment for Democracy, National Democratic Institute President Derek Mitchell, International Republican Institute President Dan Twining, Solidarity Center Director Shawna Bader-Blau and Andrew Wilson, Director of the Center For International Private Enterprise. “Nonetheless, we are confident in the enduring strength of American institutions, and that any attempts to subvert our democracy will not succeed. Those involved in illegal activity today must be held to account.”

“A fundamental tenet of democracy is the peaceful contest of ideas among fellow citizens under law. After a free and fair election, when incumbents are defeated, a peaceful transfer of power must result,” they affirmed. ” It is through such democratic processes that fundamental freedoms are protected, and opportunity and justice are possible for all. We know from decades of experience that the job of democracy is never done, and that democracy is fragile. But we also know it is resilient.”

“We have faith that our country will soon begin a period of national healing that will renew our democracy. As Americans continue on their difficult but historic journey to form a ‘more perfect union’ at home, we want to reaffirm our commitment to stand in solidarity with all those around the world who share democratic values and who continue to fight against all those who would subvert them.”

Europe is not immune from America’s political madness https://t.co/L9tfmLLSy0 via @financialtimes