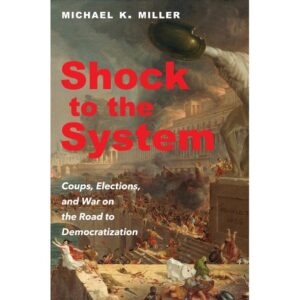 So many cases of democratization start with a period of elite political violence where the initial stages have nothing to do with democratization, says George Washington University’s Michael Miller, the author of Shock to the System: Coups, Elections, and War on the Road to Democratization, a survey of 139 democratic transitions.

Democracy assistance practitioners will be interested in a number of the book’s insights.

“No country exists in isolation from the wider world,” he observes. “By most accounts, international factors have risen in importance in explaining democratization, with some scholars claiming they are now better predictors than states’ domestic characteristics.”

People are not aiming for or barely even thinking about democratic transition. It’s all about elite political struggle and out of that chaos a bit later you get democracy, he tells Democracy Paradox.