A year after anti-government protests broke out across Cuba on 11th July 2021, the repercussions of these demonstrations are still being felt. Judicial proceedings against protesters are still ongoing, and civil society groups report that the suppression of civic space has since intensified, CIVICUS reports:

The Inter-American Commission on Human Rights (IACHR) identified six waves of repression following the protests. These included hundreds of cases of people being harassed, detained, and prosecuted for protesting; enforced disappearances; increased surveillance; and the approval of restrictive legislation aimed at monitoring and punishing dissidents and reducing the space for independent civil society to operate.

A report by civil society groups Cubalex and Justicia 11J detailed hundreds of cases of people detained in the context of the demonstrations. According to their monitoring, 1484 detentions took place, and over 700 people had been arrested and convicted, or were still facing charges by July 2022.

The Cuban Conflict Observatory (OCC) concludes its latest monthly report by noting that, at the end of July, the government shows no signs that it will move on to resolve the problems that sour daily life, The Foundation for Human Rights in Cuba (FHRC) adds. 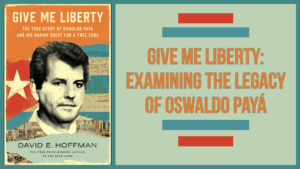 “The really unique thing about Oswaldo is that he got 35,000 people to rise up against the dictatorship,” according to David Hoffman, the author of  “Give Me Liberty.” Oswaldo Payá, the Cuban dissident who challenged Fidel Castro with an unprecedented citizen petition “had a brilliant idea and that was to use the state law against himself. That made people lose their fear,” he told Jorge Elías (see below).

Cuban activist and art historian Carolina Barrero presented a plaquette to Dutch diplomat Bastiaan Engelhard (above), the second diplomat from the Netherlands to receive the “Award for diplomacy committed to human rights in Cuba” granted by CADAL.