Social media is neither inherently democratic or undemocratic, “but simply an arena in which political actors — some which may be democratic and some which may be anti-democratic — can contest for power and influence,” a new report suggests (In 2010, the Journal of Democracy featured an article about social media entitled “Liberation technology.” By 2017, the same journal was running “Can democracy survive the Internet?“), IJNet notes.

The report, released this week by the philanthropic Hewlett Foundation, “Social media, political polarization, and political disinformation: A review of the scientific literature.” The review of the literature is provided in six separate sections, that cumulatively are intended to provide an overview of what is known—and unknown—about the relationship between social media, political polarization, and disinformation, Hewlett adds. These six sections include:

The United States has been the victim of repeated cyberattacks by foreign powers, and it seems to have little power to stop them, according to Michael Sulmeyer, director of the Cyber Security Project at the Harvard Kennedy School’s Belfer Center. 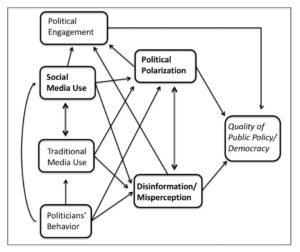 There are three main problems with U.S. efforts at cyber-deterrence, he writes for Foreign Affairs: 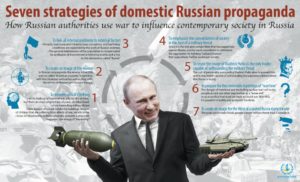 Russia can paralyze the politics in NATO member states to undermine the alliance. For its part, NATO seems fixated on the benchmark of defense spending at 2 percent of GDP to deter a Russian conventional attack. This conventional paradigm ignores the cognitive challenge that Russia pursues to weaken NATO from within. NATO must build on its whole-of-nation approaches, public-private partnerships and fledgling cyber capabilities to overcome its eclipsing bias of seeing the Russian threat as one of aircraft and tanks to one of malware and spies.

This isn’t your father’s Cold War: Russia has been very effective at leveraging and gaming the loopholes and contradictions of the liberal order to advance their interest, say Brookings analysts Alina Polyakova and Benjamin Haddad.

“Building Western resilience demands that we have an honest look at our systems, and address the weaknesses that have been so flagrantly exploited,” they contend. “The same way Russian electoral interference depends on the very real grievances of voters, brazen Russian behavior on Western soil is ultimately possible because we haven’t closed the door to their kleptocratic elites.”

The Kremlin has spent billions on an ambitious nationwide exhibition to promote its version of Russia’s history to schoolchildren, Coda Story adds.

The so-called European Council on Democracy and Human Rights website may look legitimate at first glance, but a few clicks reveals irregularities, Polygraph reports. For example, there is a section under “projects” about Russian presidential election monitoring, but nothing about the regional elections they supposedly observed in September 2017. The ECDHR also lists no methodology for how it observes elections. Legitimate election monitoring organizations typically spend more time in the country prior to and after the election, and typically write detailed reports explaining their methodology and

findings. For example, one can look at this field guide for election monitors from the National Democratic Institute [a core institute of the National Endowment for Democracy].

The Kremlin Watch Program at the European Values Think-Tank aims to create expert pressure for joint actions against Russian hostile activities.”We believe that it is high time for Western governments to start taking seriously the threat posed by Russia and respond to the Kremlin’s increasingly audacious aggression with resolute diplomatic and counter-intelligence measures,” says its Open Call. To co-sign, add your details here.