As the current crisis in Ukraine shows, the ability to mobilize coalitions of democracies remains one of the United States’ essential assets, says G. John Ikenberry, Albert G. Milbank Professor of Politics and International Affairs at Princeton University and the author of A World Safe for Democracy: Liberal Internationalism and the Crises of Global Order.

Beneath the realm of government and diplomacy, the United States’ domestic civil society—enriched by its multiracial and multicultural immigrant base—connects the country to the world in networks of influence unavailable to China, Russia, and other powers, he writes for Foreign Affairs:

In the past century, U.S. civil society has increasingly become part of an expansive global civil society. This sprawling transnational civil society is an often overlooked source of American influence, fostering cooperation and solidarity across the liberal democratic world. China and Russia have their own political networks and diaspora communities, but global civil society tends to reinforce liberal principles, amplifying the United States’ centrality in global confrontations over world order.

Many observers believe the West will get a huge boost if Russia loses the was in Ukraine, Eurasia Group analyst Cliff Kupchan observes. Others see a big hit to the international order if Russia wins, including a weakening of the norm against the use of force for territorial conquest.

But history will likely view this war as a regional conflict that didn’t alter the international system. The United States and China were the superpowers in a bipolar world before the war, and they will be after it, he writes for the National Interest. 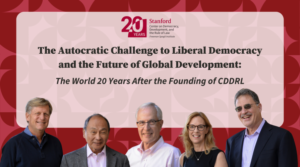 At the core, one of the United States’ greatest strengths is its capacity to fail; as a liberal society, it can acknowledge its vulnerabilities and errors and seek to improve, a distinct advantage over its illiberal rivals in confronting crises and setbacks, Ikenberry adds:

If the past is any guide, the United States should not try to simply consolidate the old order but to reimagine it. U.S. leaders should seek to broaden the democratic coalition, reaffirm basic values and interests, and offer a vision of a reformed international order that draws states and peoples together in new forms of cooperation. RTWT