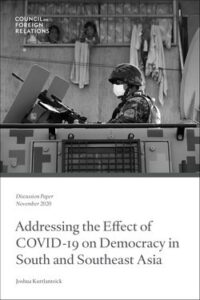 Even before the coronavirus emerged, growing political polarization, illiberal populism and sectarianism, the legacy of authoritarian rule, and the continuing influence of militaries in politics were undermining democratic politics in South and Southeast Asia, notes Joshua Kurlantzick, senior fellow for Southeast Asia at the Council on Foreign Relations.

Although failures to address COVID-19 could rebound against incumbent politicians, Philippines’ President Rodrigo Duterte and other illiberal populists today are likely more secure in office than earlier populists would have been, because social media makes it easier for them to distort information and because they are more willing to use violent repression to stay in office, he writes in Addressing the Effect of COVID-19 on Democracy in South and Southeast Asia, a new Council on Foreign Relations Discussion Paper:

Illiberal populists and other illiberal leaders today can bypass traditional gatekeepers, who have lost influence in the last decade, and deliver their often-distorted messages directly to the public via social media and the partisan press. In addition, while a generation of populists in the 1990s and 2000s used techniques such as altering voting systems to wield power but shied away from violently targeting opponents, the current generation is more willing to instigate violence against other politicians and opponents in civil society. 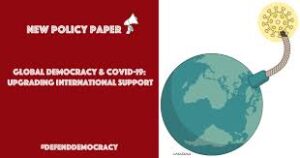 But despite the bleak outlook, the situation in Southeast Asia remains less grim than in some other developing regions, Kurlantzick concludes:

Many, though not all, illiberal Southeast Asian leaders are more constrained in how far they can repress democracy than peers in places such as Africa, because Southeast Asian states had built relatively strong democratic institutions and norms before the pandemic. And Southeast Asian illiberal leaders are not Xi Jinping or Abdel Fatah al-Sisi. Unlike truly autocratic leaders, they maintain a veneer of democratic politics, allowing at least somewhat free and fair elections, tolerating opposition parties while also harassing them, and accepting some degree of civil society activity. These constraints make Southeast Asia’s illiberal leaders more vulnerable than outright autocrats to real reform efforts. Even partially free and fair elections, and partially free civil society, provide the foundations for greater democratization.

Can COVID-19’s Impact on Democracy in Southeast Asia be Reversed? @Diplomat_APAC https://t.co/eYIkl6PLO7