CNN’s Jake Tapper met with Myroslav Marynovych (above), vice-rector of Ukrainian Catholic University in Lviv and a former prisoner in the Soviet gulag in the Ural Mountains.

“This is the place the tragedy is concentrated. It’s a very painful place,” Marynovych said of their meeting place – Ukraine’s National Museum and Memorial of Victims of Occupation Regimes, which highlights Polish, Nazi and Soviet oppression. 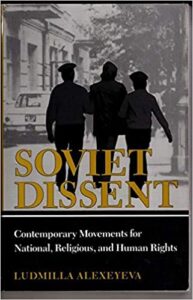 In the 1970s, he and other activists with the Helsinki Watch Group (see below) were jailed for documenting and publishing details of Soviets’ human rights abuses in Ukraine, as documented in Ludmilla Alexeyeva’s book, Soviet Dissent.

“Mass killings, mass torturing, awful information war against local population. Now we see the same technique in the eastern of Ukraine,” Marynovych tells Tapper. “If Putin prevails, then the whole Ukraine will be intimidated with awful terror. So, I’m very afraid of this.”

“I am absolutely sure that Ukraine will win this war, because we understand the danger that may happen with us if Putin wins,” he adds, but cautions that he hears echoes, not only of Stalin, in what Putin says, but of world leaders who tried to appease the Soviet dictator.

“He was victorious. So, the world decided, OK, for security reason, we would better preserve peace,” Marynovych recalls.

“But, for us, it was like leaving seeds in the ground. And now we see that these seeds are blossoming again, seeds of crimes, seeds of communist ideology, communist visions. That’s why my appeal now to the world is, please do not commit the same mistake in order to preserve security, to leave these Putin seeds in the ground again.”