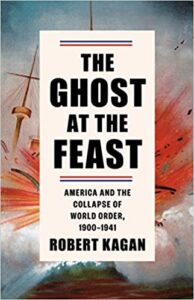 The war in Ukraine has provided a new impetus for closer collaboration among most democracies. Even if there is a ceasefire and peace settlement, Russian decline has accelerated, the Atlantic Council observes. it outlines several scenarios of how geopolitics could be transformed depending on what trajectory the conflict over Ukraine takes next.

If the United States and its allies—with their combined economic, political, and military power—had collectively resisted Russian expansionism from the beginning, Putin would have found himself constantly unable to invade neighboring countries, argues Robert Kagan, a Senior Fellow at the Brookings Institution and the author of the forthcoming book The Ghost at the Feast: America and the Collapse of World Order, 1900–1941.

Unfortunately, it is very difficult for democracies to take action to prevent a future crisis, he writes for Foreign Affairs:

The risks of acting now are always clear and often exaggerated, whereas distant threats are just that: distant and so hard to calculate. It always seems better to hope for the best rather than try to forestall the worst. This common conundrum becomes even more debilitating when Americans and their leaders remain blissfully unconscious of the fact that they are part of a never-ending power struggle, whether they wish to be or not.

The collapse of the Soviet Union …. expanded U.S. influence because the United States’ combination of power and democratic beliefs made the country attractive to those seeking security, prosperity, freedom, and autonomy. The United States is therefore an imposing obstacle to a Russia seeking to regain its lost influence, Kagan adds:

The collapse of Soviet power enhanced the attractive pull of the United States and its democratic allies. Their prosperity, their freedom, and, yes, their power to protect former Soviet satellites, when combined with the inability of Moscow to provide any of these, dramatically shifted the balance in Europe in favor of Western liberalism to the detriment of Russian autocracy. The growth of U.S. influence and the spread of liberalism were less a policy objective of the United States than the natural consequence of that shift.

If Americans learn anything from Russia’s brutalization of Ukraine, it should be that there really are worse things than U.S. hegemony, Kagan concludes. RTWT