The surest way to lose an election in south Asia is to be too enthusiastic about China’s Belt and Road Initiative. Wherever Chinese influence has grown, governments have turned more authoritarian, The Financial Times cautions.

Chinese influence — and investment — have been decisive factors in electoral upsets in Pakistan, Malaysia and the Maldives. In each case, opposition parties critical of Beijing’s “debt trap diplomacy” have been rewarded at the ballot box, The FT adds:

Part of the problem is the sheer speed with which China’s regional influence has grown. In the Maldives, for example, Beijing did not have an embassy until eight years ago. Today, China accounts for a quarter of the Maldives’ foreign tourists and around two-third of its external debt. Beijing must also bear some responsibility for the unpopularity of the politicians it supports in these countries. Wherever Chinese influence has grown, governments have turned more authoritarian. The whiff of corruption also hangs over many big Chinese infrastructure deals, most of them concluded in secret between Chinese banks and construction companies, and host governments. RTWT

The strategy of encouraging Chinese economic liberalization in the hope of encouraging political liberalization was flawed, especially as China under Xi Jinping and the Chinese Communist Party (CCP) has transformed itself into a global power without reforming, notes the 2018 annual report of the U.S.-China Economic and Security Review Commission (USCC), RFA reports.

“For several decades, U.S. policy toward China was rooted in hopes that economic, diplomatic, and security engagement would lay the foundation for a more open, liberal, and responsible China. Those hopes have, so far, proven futile,” said the authors. “In word and deed, the CCP has abandoned any inclination for economic and political liberalization.”

The Belt and Road Initiative (BRI) represents a new type of colonialism, the report adds. “Beijing often contrasts its so-called no-strings-attached approach to development with the established global norms which condition financing on good governance, sustainability, transparency, and freedom from corruption,” it said.

The report recommended that the U.S. Congress create a fund to assist countries in parts of the world, where China is expanding its influence, Reuters adds. 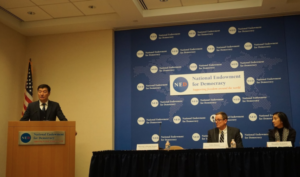 BRI partner countries will inevitably endure considerable social, political, and economic costs for allowing Chinese infrastructure initiatives within their borders, said Tibetan Central Administration President Dr. Lobsang Sangay. Would-be partners should learn from Tibet’s experience and ensure that history does not repeat itself, he told an event at the National Endowment for Democracy titled Tibet and the Belt and Road Initiative: Lessons Learned from the Tibetan Experience with Chinese Infrastructure Projects.

Despite these missteps, Vice President Mike Pence can use his current trip to Asia to burnish four cornerstones that should be the foundation of the administration’s free and open Indo-Asia-Pacific strategy, especially in Southeast Asia and the Pacific Islands, he writes for Foreign Policy. Those four elements are a rules-based order, sustainable economic development, inclusive diplomacy, and effective security cooperation.