Advocates for Rule of Law in Africa, Human Rights Lawyers in China, and Nightwatchers group of photojournalists in the Philippines received the World Movement for Democracy’s Democracy Courage Tributes at the closing dinner of its Ninth Global Assembly in Dakar, Senegal on May 9, 2018.

The movement recognized Advocates for the Rule of Law in Africa for holding government leaders accountable and protecting the integrity of democracy in South Africa, Kenya, and Liberia. Thulisile Madonsela, the former Public Protector of South Africa (2009-2016), who played an important role in triggering the corruption investigation against former President Jacob Zuma, accepted the Tribute. 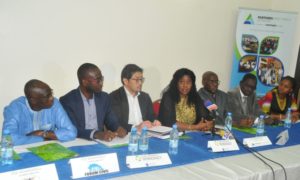 In memory of Li Baiguang (below), one of hundreds of courageous human rights lawyers who have faced persecution for defending human rights in China since the 2015 “709” crackdown, the movement honored Human Rights Lawyers in China. Jin Bianling, wife of Jiang Tianyong, a political prisoner abducted and detained for his defense of religious minorities and other vulnerable communities, accepted the Tribute.

The Democracy Courage Tributes are a highlight of each Global Assembly and are given at the John B. Hurford Memorial Dinner, which is sponsored by the Hurford Foundation.

The World Movement for Democracy is a global network of civil society activists, scholars, parliamentarians, thought leaders, journalists, and funders who are committed to advancing democracy, writes Rappler. Since 1999, the group has facilitated networking among democracy supporters and convened discussions and workshops on democracy in different regions of the world. This week, the group held its 9th Global Assembly – “Building Strategic Partnerships for Democratic Renewal.” Rappler livestreamed select sessions from Senegal.

The Senegalese band Keurgui Crew played at the closing session (above).