Armenia’s newly elected Prime Minister Nikol Pashinyan said on Wednesday he would meet Russian President Vladimir Putin next week on the sidelines of a summit of the Russia-led economic union summit in the Black Sea resort of Sochi, Reuters reports:

Opposition leader Pashinyan was elected prime minister by Armenia’s parliament on Tuesday, capping a peaceful revolution driven by weeks of mass protests against corruption and cronyism. After being installed as prime minister, Pashinyan said he hoped to meet Putin for talks soon. The Kremlin said Putin had sent Pashinyan a telegram congratulating him on his appointment.

Thomas de Waal, a specialist on the region with Carnegie Europe, a think tank, said with the Armenian uprising, both Yerevan and Moscow had learned a new script, Reuters adds. “Russian officials have insisted that they respect Armenians’ right to peaceful change,” he said. “For his part, Pashinyan and his fellow protest leaders told their supporters to avoid anti-Russian or pro-EU slogans.”

Popular protests tend to alarm Mr. Putin, and he has invaded other former Soviet states, Georgia and Ukraine, where he saw Russian interests and influence being threatened, the Times adds:

Russia considers Armenia of such strategic importance that it maintains a military base in the country, and helps guard Armenia’s borders with Turkey and Iran. But by focusing on strictly domestic problems while pledging eternal brotherhood with Moscow, Mr. Pashinyan deftly avoided a military intervention by the Kremlin.

“There are no foreign forces involved in this process,” Mr. Pashinyan said over lunch. “I have insisted many times that there is no geopolitical context to our movement, our velvet revolution.”

The unexpected collapse of Armenia’s ruling regime is better understood if you study the story of Armenia’s break with the Soviet regime in 1988, de Waal adds. The country has a legacy of peaceful protest, national solidarity, but is also trapped by a strong nationalist discourse. 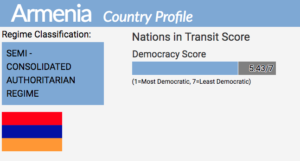 According to a 2018 Freedom House report, Armenia’s democracy score is at 5.43 out of 7 points (1 = most democratic, 7 = least democratic). Its press freedom status is “not free”, DW reports. Specifically, the report stated: “Media houses and professionals continued to experience harassment, interference, and small-scale violence. In one case, a fact-checking platform and its leader faced 30 simultaneous defamation lawsuits after publishing investigative reporting about the HHK’s abuse of administrative resources.”

Geopolitical trends in the region, notably a Russian-Turkish rapprochement and closer Azerbaijan-Russia relations, have prompted Armenia to seek support from the European Union and the United States, said Miriam Lanskoy, senior director for Russia and Eurasia at the National Endowment for Democracy, the Washington-based democracy assistance NGO.