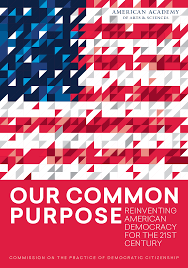 This is a moment for critics of socially irresponsible media companies to take on platforms that enable foreign interference, provide a megaphone for extremists and hate groups and make herding people into ever more extreme groups part of their business model, The Post’s Jennifer Rubin argues. Civil society — businesses, nonprofits, nongovernmental organizations, faith-based groups and community groups — have a unique opportunity (and responsibility) to apply pressure on social media companies, she writes:

The Commission on the Practice of Democratic Citizenship, put together by the American Academy of Arts & Sciences, recently included several suggestions in its report for bolstering American democracy: “Form a high-level working group to articulate and measure social media’s civic obligations and incorporate those defined metrics in the Democratic Engagement Project”; tax digital advertising to “support experimental approaches to public social media platforms as well as local and regional investigative journalism” (think of it as PBS or C-SPAN for the Internet); and start a new project to “conduct a focused, large-scale, systematic, and longitudinal study of individual and organizational democratic engagement” in the context of digital media.

Civil society can help restore civil rights and fundamental freedoms inside the European Union, and the EU’s previous experience with external tools and instruments can make a meaningful contribution to that, according to Pavel Havlíček. The EU should analyze and try to replicate the largely positive experience from the European Instrument for Democracy and Human Rights and the European Endowment for Democracy, which support civil society in its neighborhood and the world, he writes in The EU’s Lessons for Supporting Civil Society in Member States, a report for the German Marshall Fund: 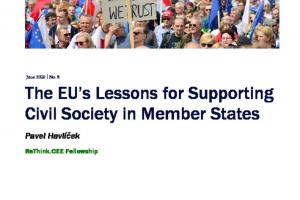 Based on the experience of the EU’s external tools and instruments in the eastern neighborhood, the EU institutions and member states should:
• Start thinking strategically about supporting civil society and not to give up on the EU’s fundamental values, despite the numerous other challenges and priorities.
• Find the political will to make use of the Multiannual Financial Framework negotiations to unblock some of the bottlenecks when designing the EU future support for civil society in member states.
• Expand the EU’s internal toolbox and come up with fresh ideas for supporting civil society
and reaching out to new actors and new parts of society, including by reacting flexibly and in
a timely way to local contexts in member states, which often requires tailor-made solutions to the complex challenges they face.
• Combine short-term response with long-term strategic vision and investment, as has been
done successfully in the eastern neighborhood, including on a regional basis.