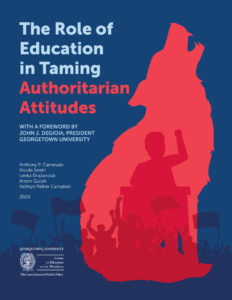 Postsecondary education can play a critical role in protecting democratic states from the threat of authoritarianism, says a new report from the Georgetown University Center on Education and the Workforce (CEW) in collaboration with Lenka Dražanová of the European University Institute.

“The Role of Education in Taming Authoritarian Attitudes” finds that higher education’s emphasis on a combination of specific and general education, including coursework in the liberal arts, contributes to its strong effect on mitigating authoritarian preferences. Higher education promotes independent thought, respect for diversity, and inquisitive assessment of evidence—all of which are antithetical to the unquestioning acceptance of authority that is characteristic of authoritarianism, the report suggests.

“In times of persistent change, especially economic threat, the pull toward authoritarianism—which is under the surface in any society—becomes stronger,” said Anthony P. Carnevale, lead author of the report and CEW director. “All of us have the propensity to seek the protection of group unity when faced with threats, but true authoritarians perceive diversity and nonconformity as threats and are willing to act on their biases.”