“We are in a very dark place,” she told the World Movement for Democracy’s 11th Assembly, as authoritarians are not only exporting repressive technologies, but diffusing ideas, norms and narratives within international forums in an effort to shape the future global information order, presenting an “existential threat” to democracy.

“It’s important to recognize digital authoritarianism as a phenomenon that’s about more than the repressive application of tech,” said Donahoe, a National Endowment for Democracy (NED) board member. “We have to see it as an alternative model of governance that’s spreading around the world, competing with democracy,” she told the Post’s Josh Rogin. 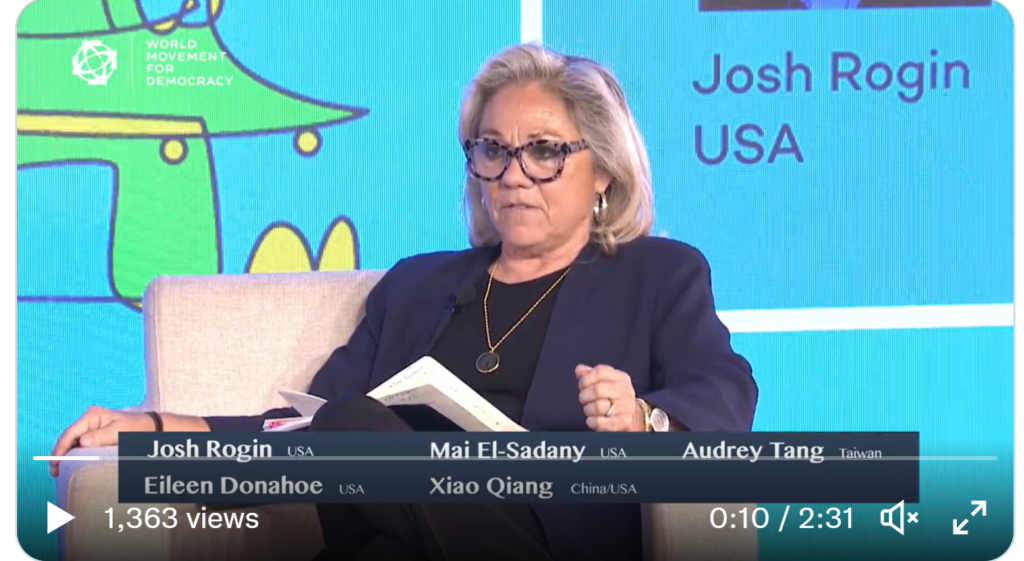 Xiao Qiang (above), the founder and editor in chief of China Digital Times, concurs.

Digital authoritarianism is not “some remote dystopian thing,” he told the assembly. “The surveillance, the control, the coercion, and the technology are facts of life for Chinese citizens today. Big data and AI are centralized, highly efficient forms of control.”

But AI can be designed and implemented in a way that is inclusive, accountable, reliable and fair, argues Nanna-Louise Wildfang Linde, Microsoft’s new VP of European Government Affairs. The war in Ukraine shows “how high the stakes are [and].. the need to act now as a collective,” she adds, insisting that technology can enhance security against cyber threats, protect election integrity and mitigate the threat of misinformation.

Historically, democracies were better able to use information than autocracies because it was available to everyone and more minds could process it, argues historian Yuval Noah Harari. Democracy has been the exception, not the norm throughout history, he cautions. Certain technological conditions are conducive to democracy, but AI [the subject of a recent NED Forum report – right] is likely to favor highly centralized regimes, he claims.

Do the ends justify the means when dealing with disinformation? asks Civic Media Observatory, reporting on how Brazil is coping with ‘digital militias’ ahead of the presidential election.

“I come from a region where the internet and tech have been a beautiful thing,” said Mai El-Sadany, a Human Rights Lawyer with the Tahrir Institute for Middle East Policy. It provided “a space where we’ve learned from each other” and exchanged ideas and information. But governments have intervened and sought to control it, she told the World Movement Assembly. 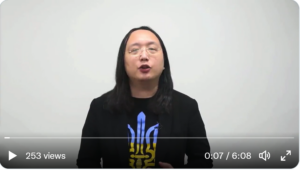 “The secret is to learn with the people, to participate, grow trust in all parts of the process by learning how to engage openly and positively while celebrating commonality and consensus instead of getting lost in the thickets of conflict,” she told the assembly.

Technology is a function of this underlying system of oppression geared to cement China’s control of Xinjiang, which has become a symbol of the state’s omnipotence and the belief by certain governments that they can use whatever means necessary to subjugate their citizens, notes Carnegie analyst Steve Feldstein:

Xinjiang stands as a warning about what the road to impunity looks like. But it is also important not to be overly deterministic about the role of technology in fostering repression—whether in Xinjiang or elsewhere. The overriding motivation guiding China’s policies in the region is a commitment to crushing dissent in the Uyghur community. Even if China lacked access to artificial intelligence technology or facial recognition cameras, there is little doubt its security forces would find alternate means to subdue citizens in the region.

U.S. legislators are proposing steps to counter the influence of foreign adversaries on the United States telecommunications infrastructure, reports suggest:

The Foreign Adversary Communications Transparency (FACT) Act would provide critical telecommunications transparency by requiring the Federal Communications Commission (FCC) to publish a list of companies that hold FCC authorizations, licenses, or other grants of authority with over 10 percent or more ownership by foreign adversarial governments – including China, Russia, Iran, or North Korea.