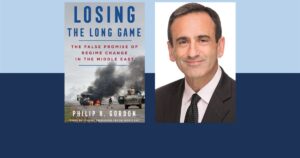 U.S. Secretary of State Condoleezza Rice’s repeated assertion around the time of the Iraq war that Washington’s pursuit of “stability at the expense of democracy” in the Middle East had produced neither was broadly true. But it turned out to have a corollary—that pursuing democracy at the expense of stability might also produce neither, but at even higher cost, notes Philip H. Gordon, Senior Fellow in U.S. Foreign Policy at the Council on Foreign Relations and the author of Losing the Long Game: The False Promise of Regime Change in the Middle East.

The more recent U.S. interventions in the Middle East have sought to replace autocratic regimes with democratic governments. But even if those actions had somehow avoided the pitfalls posed by security vacuums, popular resistance, and untrustworthy proxies, they would have been unlikely to shepherd in new democracies, he writes for Foreign Affairs: 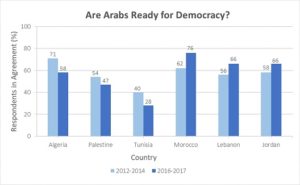 Although there are no clear recipes for democratic development, extensive scholarly research suggests that the main ingredients include a high degree of economic development; significant ethnic, political, and cultural homogeneity (or at least a shared national narrative); and the previous existence of democratic norms, practices, and institutions. Unfortunately, the states of the contemporary Middle East lack all these attributes. None of this means that democracy is impossible there or that promoting democracy should not be an American aspiration. But it does suggest that pursuing regime change in the Middle East with the hope that doing so will lead to democratic development is wishful thinking in the extreme.

The next time U.S. leaders propose intervening in the region to overthrow a hostile regime, it can safely be assumed that such an enterprise will be less successful, more costly, and more replete with unintended consequences than proponents realize or admit, Gordon concludes.

A significant majority of Arab citizens favor a democratic political system, with 76% in favor and only 17% opposed, according to the largest opinion poll of its kind released by The Arab Center for Research and Policy Studies (ACRPS). Some 74% of respondents believe a pluralist democratic system is appropriate for their countries. Yet, with almost 30,000 respondents across 13 Arab states and more than 900 researchers, the survey revealed division on the question if whether MENA societies are “prepared to practice” democracy.