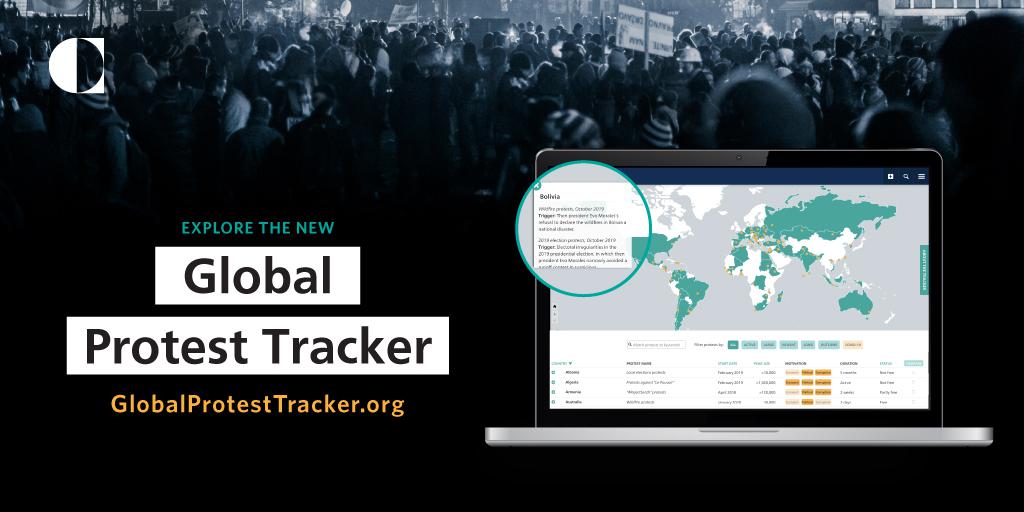 The global protest wave is a roiling tide driven by a dauntingly diverse array of factors, including the travails of democracy and autocracy alike, the shortcomings of both market and statist economies, public rancor about corruption, demographic bulges, sociocultural divides, and much else, say @CarnegieEndow analysts Thomas Carothers and David Wong.

Given this complexity, it is imperative to avoid reductive explanations and take note of the different forces that may be at work in multiple places simultaneously, they add, introducing Carnegie’s Global Protest Tracker. The information presented in the tracker highlights the shortcomings of at least five common reductive takes on the global protest wave, they suggest:

1. THE CORONAVIRUS CRISIS SOUNDS THE DEATH KNELL OF THE GLOBAL PROTEST WAVE.

…..The current pause in protests might actually bolster the long-term sustainability of existing protests by providing fatigued demonstrators in areas such as Hong Kong and Chile with time to recuperate and strategize. The unfolding economic devastation resulting from the virus and the governance crises it has triggered may also sow the seeds for future protests. By exposing governments’ incompetence in key areas such as public health and socioeconomic justice, the global pandemic could reinvigorate existing protests or even ignite demonstrations in new contexts.

2. THE PROTEST WAVE SIGNALS A GLOBAL CRISIS OF DEMOCRACY.

Certainly, some of the protests reflect significant discontent toward democratic governments….Yet the broader picture is more complex. Of the approximately one hundred protests included in the tracker, fifty-eight have taken place in countries rated as “not free” or “partly free” by Freedom House. Popular fatigue and anger toward authoritarian leaders remain a reality that can manifest in public demonstrations of significant size, despite the difficulties of mounting a protest in dictatorships, where freedom of expression and assembly tend to be curtailed….RTWT