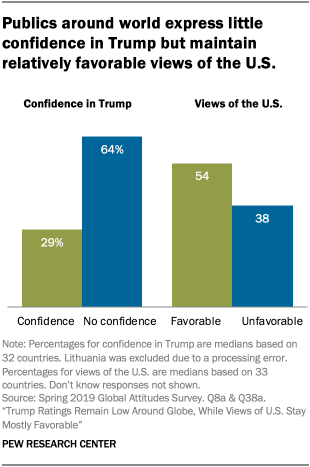 Anti-Americanism has surged in much of the world, according to new polling from the Pew Research Center. But unlike an earlier generation of detractors, critics are less concerned about the exercise of unrivaled U.S. power than they are about a U.S. retreat—from both global leadership and liberal democracy, notes Richard Wike, Director of Global Attitudes Research at the Pew Research Center.

In fact, a major driver of anti-Americanism today has less to do with geopolitics or foreign policy and more to do with the unease that currently pervades democratic societies amid a global “democratic recession,” in the words of the political scientist Larry Diamond (below),* he writes for Foreign Affairs:

According to International IDEA’s most recent assessment of the global state of democracy, “Democracy is ill and its promise needs revival.” The scholars Roberto Stefan Foa and Yascha Mounk have examined public opinion over time and found decreasing support for democracy and growing support for nondemocratic forms of government in a number of supposedly “consolidated” democracies. In many ways, liberal democracy is experiencing a crisis of confidence, as recent Pew data shows. A 2017 survey found a median of 78 percent across 38 countries saying representative democracy is a good form of government, but surprisingly high numbers were also open to nondemocratic alternatives, such as rule by experts (49 percent), rule by a strong leader who doesn’t have to bother with parliaments or courts (26 percent), or even military rule (24 percent).

There also are stark generational differences about foreign policy – and whether the United States is superior to other countries in the world.

In 2006, there were only modest generational differences on whether good diplomacy or military strength is the best way to ensure peace, Pew adds. Today, Millennials are by far the most likely among the four generations to express the view that good diplomacy is the best way to ensure peace (77% say this), while Silents are the least likely to say this (43%). Nearly six-in-ten Gen Xers (59%) and about half of Boomers (52%) say peace is best ensured by good diplomacy rather than military strength.

“Democracy is a popular idea, but the degree to which people are committed to democratic rights and institutions is often underwhelming,” Wike adds. “Moreover, there are growing doubts about how well the United States can serve as a model of liberal democracy.”

Sixty-two percent of Millennials say the United States should take an active role in world affairs. This is a smaller majority than any of the older generations but similar to Boomers’ levels when Boomers were the youngest Americans. Millennials are the only generation in which a majority say the United States is no greater than other countries (57%), according to a Chicago Council on Global Affairs survey:

On the other hand, majorities across all generations believe that maintaining US alliances, promoting democracy and human rights around the world, and participating in international organizations makes the United States safer. Large majorities of every generation say NATO is still essential to US security (71% Millennial, 70% Gen X, 76% Boomer, 76% Silent) and even higher proportions of each generation say the United States should increase or maintain its commitment to NATO.

Millennials are also the most likely to support compromise on policy decisions with the United Nations even if that means the United States sometimes forgoes its first choice, CCGA adds. 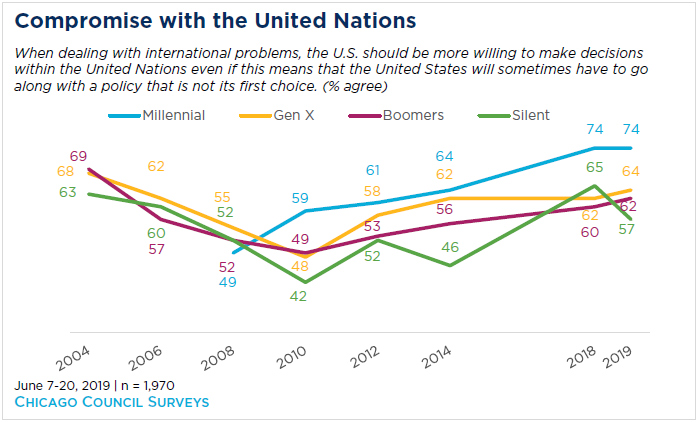 Other Western democracies, such as Canada and the European Union, should take up the slack on advancing democracy, some observers suggest.