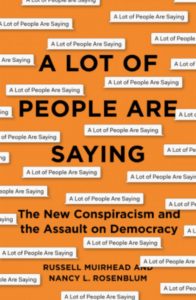 GONE ARE the days when conspiracy-mongers had to find shards of evidence and contort it to convince people. Now, just their malevolence is needed. If a concocted scenario can’t be proved, then perhaps it can’t be disproved either. That is toxic for a stable society and politics. So how did we get here, and how do we get out? The Economist asks:

Nancy L. Rosenblum of Harvard University and Russell Muirhead of Dartmouth College are the authors of “A Lot of People Are Saying: The New Conspiracism and the Assault on Democracy” (Princeton, 2019). Though conspiracy theories have always existed, they note that today something is different and dangerous: “Conspiracy without the theory.”

“Its proponents dispense with evidence and explanation. Their charges take the form of bare assertion,” they explain in an interview. “It is a powerful force, with the capacity to animate popular fury, to delegitimise political opposition, and to hijack government institutions.”

The counter-force comes from the authority of knowledge-producing institutions (that is, courts, expert-staffed agencies, research universities) on one side, and democratic common sense on the other. Wherever conspiracism is reshaping public life, two preventatives are vital: to defend the integrity of knowledge-producing institutions and bolster confidence in the ballast of common sense….. 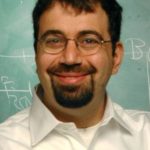 Two forces are likely to push new technologies in a direction whereby they are adaptive rather than hubristic, designed to empower society rather than silence it, argues Daron Acemoglu, Professor of Economics at MIT, co-author (with James A. Robinson) of Why Nations Fail: The Origins of Power, Prosperity and Poverty and The Narrow Corridor: States, Societies, and the Fate of Liberty 2019.

Democracy provides the best mechanism for airing diverse viewpoints and organizing resistance to costly or dangerous high-modernist schemes, he writes for Project Syndicate. By speaking out, we can slow down or even prevent the most pernicious applications of surveillance, monitoring, and digital manipulation.