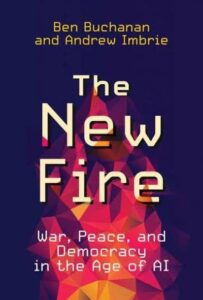 The notion that artificial intelligence will benefit autocracies at the expense of democracies, that unencumbered by ethics, autocrats will crush dissent with automated surveillance systems, is too fatalistic, say Ben Buchanan and Andrew Imbrie, researchers at Georgetown’s Center for Security and Emerging Technology, currently acting as assistant director of the White House Office of Science and Technology Policy and the State Department, respectively.

The age of AI is still young, and its outcome is far from preordained, they argue in their new book, The New Fire: War, Peace, and Democracy in the Age of AI, Fast Company reports:

Democracies have the opportunity to develop shared norms for the technology’s use at home and abroad, unlocking its extraordinary potential while still guarding against bias and preserving civil liberties. They have the capacity to integrate it into militaries and intelligence agencies in such a way that preserves and enhances democratic values while putting autocracies on the defensive. Most importantly, democracies offer an innovative ecosystem that can determine where the technology goes next.

Some of the more disturbing implications of artificial intelligence are discussed in The Global Struggle Over AI Surveillance: Emerging Trends and Democratic Responses, a new report from the International Forum for Democratic Studies at the National Endowment for Democracy (NED). 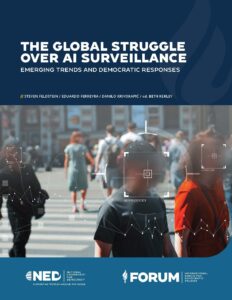 “From cameras that identify the faces of passersby to algorithms that keep tabs on public sentiment online, artificial intelligence (AI)-powered tools are opening new frontiers in state surveillance around the world,” states the report, edited by the Forum’s Beth Kerley, which addresses both the democracy implications of new technologies and vectors for civil society involvement in their design, deployment, and operation:

#Democracies have the capacity to integrate #AI in such a way that preserves & enhances democratic values while putting #autocracies on the defensive, @BuchananBen @georgetownsfs & @Andrew_Imbrie@CSETGeorgetown write for @FastCompany https://t.co/u7abZPVHf2