Despite profound dissatisfaction, extraordinary polarization, and a poor rating for President Nicolas Maduro’s performance, his regime “maintains a considerable base,” according to a national poll conducted last month by the Albright Stonebridge Group and GBAO.

But Maduro would lose an election under any scenario and opposition leader Juan Guaido is only politician with a favorable rating, notes the survey, commissioned by the Center for Strategic and International Studies. A clear majority of 58% of respondents want members of the armed forces to support the government of Guaidó rather than maintain their loyalty to Maduro and the military. 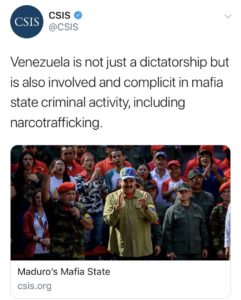 A Venezuelan general called on the country’s armed forces on Sunday to rise up against Maduro, who has relied on the backing of the military to hold on to power despite an economic collapse, Reuters reports:

Ramon Rangel, who identified himself as an air force general, said the Venezuelan government is being controlled by the “communist dictatorship” in Cuba – a key Maduro ally. “We have to find a way to get rid of the fear, to go out into the streets, to protest, and to seek a military union to change this political system,” Rangel, dressed in a suit with a copy of the constitution in his hand, said in a video posted on YouTube. “It’s time to rise up.”

Opposition leader Guaido, who has sought to oust Maduro, said at a Saturday rally that he told his envoy in the United States to open “direct communications” regarding U.S. military coordination (AP, HT:CFR) with the opposition. 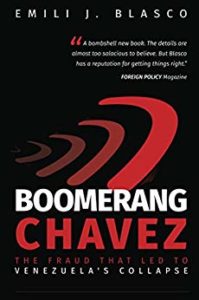 A “Cartel of the Suns” linked to Diosdado Cabello, the president of the National Assembly and the second most powerful member of the regime after Maduro, has turned Venezuela into “a global hub for cocaine trafficking and money laundering,” The Washington Post’s Jackson Diehl notes. Cuba’s communist regime and the Lebanese militia Hezbollah have been cut in on the trafficking, he adds, citing a detailed account in Spain’s ABC newspaper, with a book – Boomerang Chavez: The Fraud That Led to Venezuela’s Collapse – by ABC reporter Emili Blasco, and a lengthy report in the Wall Street Journal.

In Venezuela, it looks like Russia is once again playing a weak hand well, Bloomberg‘s Eli Lake writes. The U.S. has imposed crippling sanctions on the state-owned oil company and lifted them on officials who have joined the opposition, such as the intelligence chief. And yet, with the support of Russia, Maduro survives. 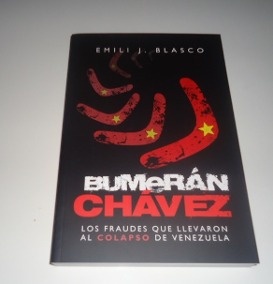 U.S. officials believe there are about 20,000 Cubans in Venezuela, including security forces, intelligence agents, among others such as doctors and health professionals, notes CSIS analyst Moises Rendon. Colombia’s National Liberation Army (ELN) have presence roughly in half of the states of Venezuela.

Things will go from bad to worse for Havana if Mr. Guaidó is allowed to hold elections, says the Wall Street Journal’s Mary Anastasia O’Grady:

This is why the Cubans are ruthlessly cracking down on the opposition while making the absurd
proposal to the Lima Group that Havana ought to mediate a compromise solution. As if the fox
ought to decide the fate of the hens. Defectors repeatedly testify that Cubans are behind the
Venezuelan police state. It’s why the U.S. and its allies must shift their focus to Havana.

Cuba is interested in keeping Maduro in power, since Chavista money has kept the Cuban economy afloat and because his downfall would mean another failure for the Cuban political model in Latin America, according to Alejandro Barahona, a political scientist and international analyst at the University of Costa Rica.

“Cuba’s interest is mainly economic. Cuba literally sold Venezuela its model in exchange for oil, and later for the sale of services in areas such as education, health, military advice, and espionage,” Barahona told Diálogo. “Venezuela also brought Cuba many political gains with multilateral organizations. Undoubtedly, Cuba will do whatever it takes to help Maduro remain in power, because he is its main economic and political support.”