Historians say millions of Soviet citizens were executed, died in labor camps or were starved to death under Josef Stalin’s dictatorship. But Russian President Vladimir Putin has said that “excessive demonization” of the dictator is used to attack Russia, The Wall Street Journal reports:

Mr. Putin has made the victory in World War II, led by Stalin, a centerpiece of state propaganda. Stalin’s popularity surged as the Kremlin annexed Crimea in 2014 and confronted the West, with a March survey by the Levada-Center pollster showing 40% of respondents saw him in a positive light and only 12% a negative one.

In the 1970’s Arseny Roginsky edited and compiled a samizdat collection of materials on the history of political repression in the USSR for publication in Paris. From 1981 until 1985 he was a political prisoner in a Soviet camp, sentenced for his publication of historical, literary and political writing. 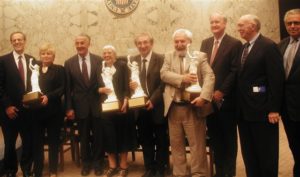 “The Right to Memory” documents Roginsky’s reflections on himself and his country, the Wilson Center notes. Roginsky [a recipient of the National Endowment for Democracy’s 2004 democracy award – right] was one of Russia’s most distinguished public intellectuals and was an historian, a former political prisoner, and a co-founder of “Memorial”, which this fall celebrates 30 years since its founding. In this intimate portrayal, he reveals his innermost thoughts about his birth in the GULAG, state terror, and why his countrymen reject the memory of the totalitarian past.

Join the U.S. premiere of the film, followed by a discussion and a reception. 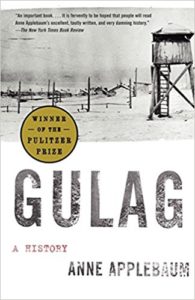 Ludmila Gordon, Film Director of “The Right to Memory”