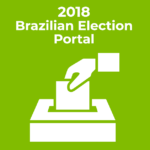 An authoritarian-seeming partial outsider who praised the country’s military dictatorship, rejects some rules of the democratic game and threatens to undermine citizen’s rights has won the first round of the Brazilian presidential elections, note analysts Luis Schenoni and Scott Mainwaring. Jair Bolsonaro is now the front-runner for the second and final round of the elections. If he wins, he may corrode the largest democracy in Latin America from the inside out, they write for The Washington Post’s Monkey Cage blog:

Brazil is not the only Latin American country with troubled politics. Democracy has collapsed in Nicaragua and Venezuela and is in serious trouble in countries such as Bolivia and Honduras. In El Salvador, Guatemala, Honduras and Mexico, just as in Brazil, criminal organizations rule the poorer parts of many cities, weakening democracy and undermining the rule of law. Data from the Varieties of Democracy (V-Dem) project — along with several other sources — show that democracy is weaker than it has been for decades. Public support for and satisfaction with democracy is also falling, according to the Latin American Public Opinion Project (LAPOP) and Latinobarómetro.

Latin America’s largest country has experienced a political perfect storm: a corruption scandal of unprecedented scope combined with a severe economic recession. Not surprisingly, public discontent has soared, adds Steven Levitsky, Professor of Latin American Studies and professor of government at Harvard University. The 2017 Latinobarometer survey found that only 13 percent of Brazilians were satisfied with democracy—the lowest figure in Latin America. Other surveys found more than 40 percent support for a military coup, he writes for the Journal of Democracy, a publication of the National Endowment for Democracy and Johns Hopkins University Press:

Brazil’s fragmented field of presidential candidates includes democratic alternatives on the center-right (Geraldo Alckmin) and the center-left (Ciro Gomes, Marina Silva, and Fernando Haddad, who is now the PT’s official candidate), but the specter of Bolsonaro’s authoritarianism looms large. This should worry democrats across the region. Brazil has developed robust democratic institutions, and it may well survive the current storm. But if Brazilian democracy fails, the consequences could be disastrous for the entire region.