Conventional wisdom on democracy’s troubles is still taking shape, but it generally holds that a dozen or so countries have backslid in a global trend dating roughly to the global financial crisis of 2008, the New York Times reports:

But a well-regarded data set called V-Dem, which quantifies dozens of democratic indicators in every country, like the freedom of opposition parties and the independence of courts, allowed the political scientists Anna Lührmann and Staffan I. Lindberg to test those assumptions.

They reached a chilling conclusion, published in a new paper: A wave of global “autocratization,” with countries growing less democratic and more authoritarian, began building in 1994, long before most of us noticed. And the number of countries to have taken significant steps backward is not a dozen but 75. It is the largest such wave since at least 1900. The trend was partly hidden because countries don’t turn authoritarian overnight the way they used to, through a coup or an invasion.

The first overview of all autocratization episodes from 1900 based on data from the Varieties of Democracy Project (V-Dem) demonstrates that “a third wave of autocratization is indeed unfolding,” they write in the journal Democratization:

It mainly affects democracies with gradual setbacks under a legal façade. While this is a cause for concern, the historical perspective presented in this article shows that panic is not warranted: the current declines are relatively mild and the global share of democratic countries remains close to its all-time high. As it was premature to announce the “end of history” in 1992, it is premature to proclaim the “end of democracy” now.

A case in point…. 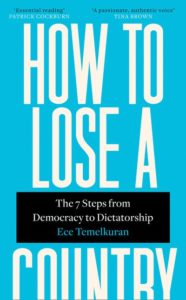 In How to Lose a Country: The 7 Steps from Democracy to Dictatorship, Ece Temelkuran described the incremental growth of autocratic rule in Erdogan’s Turkey.

Today’s authoritarian regimes have grown “smarter” in other domains as well, beyond political institutions. Their goal is to mimic the virtues of democracy, such as accountability, contestation, and representation, using methods that are superficial and fall short of real reform, notes Erica Frantz, an assistant professor in political science at Michigan State University:

Examples are wide-ranging, including legalizing nongovernmental organizations—but only those that secretly promote the government agenda—and using election monitors—but only those that validate the government’s intended result. Many of today’s authoritarian regimes even pay for public relations firms to sell a positive image of their government domestically and overseas. All of these moves enable authoritarian governments to pretend to be democratic while making it more difficult to charge that they are not.

Although it is true that more of the world is democratic than ever before, there are signs that progress may soon come to a halt. Democracies are gravitating toward authoritarianism in a number of surprising places, she writes for Foreign Policy:

At this point, we can only speculate as to why this is happening now. Likely causes include citizen disillusionment on the heels of the migration crisis, rising inequality, and stagnating standards of living. Regardless, although we have traditionally viewed the developed world as immune to this sort of thing—especially democratic backsliding evolving into full democratic breakdown—we no longer can. Meanwhile, today’s authoritarian regimes are making it more difficult to brand them as such. They are increasingly mimicking the traits of democracy, in ways that seem liberal but actually work to extend the authoritarian lifespan.

“However, the message is not all gloom and doom,” Frantz  adds. “Although authoritarian regimes with pseudo-democratic institutions are longer-lasting, when they do collapse, they are more likely to transition to democracy than to another dictatorship. The experience of Malaysia gives particular cause for optimism.”

“Every type of regime is getting worse,” Diamond adds. “Liberal democracies are becoming more intolerant. Illiberal democracies are electing authoritarian personalities like President Duterte in the Philippines, who are purging judges and locking up journalists who dare to criticize them. Authoritarian regimes that once coexisted with pockets of opposition no longer see the need to bother. In Cambodia, the party of the long-ruling dictator, Hun Sen, now controls every seat in Parliament. And China is now constructing the first truly Orwellian surveillance state.”

“We still live in a democratic era,” V-Dem’s Lührmann and Lindberg write. However….

Democracy is even now not too far from its historic peak in popularity. And much of the backsliding has been incremental, rather than transformational: strong democracies becoming weak, authoritarian states becoming more authoritarian.

Still, there is good reason to temper hope for Algeria. The global “wave” of authoritarianism building since 1994 has not yet crested. Indeed, their data shows, it “may still be picking up.” RTWT