Contrary to claims and some expectations, “the increases in tourism and remittances and the opening of official diplomatic ties did not spur gains for Cubans on the human rights and political front,” he writes:

The Cuban Commission for Human Rights and National Reconciliation, an independent nongovernmental organization, found that in 2016 Cuban authorities detained 9,940 individuals, a record number. There were 5,155 detentions reported in 2017, but there were likely many more prisoners of conscience. Internet censorship has not diminished nor has access expanded. There have, of course, been no free elections. 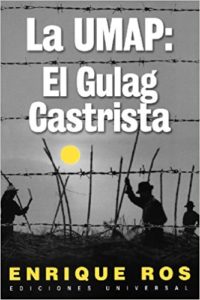 The Military Units of Production Assistance (UMAP) as “a very dark affair in the history of revolutionary Cuba,” said singer-songwriter Pablo Milanés, who described them as “concentration camps” where thousands of young people were sent to be “reeducated” by order of Fidel Castro, he told Diario de Cuba:

In an interview with the newspaper La Tercera the musician described his experience between 1965 and 1967, when these detention centers were in operation and where he was subjected to forced labor and rigid indoctrination. Milanés managed to escape and flee to Havana, but was jailed for insubordination.

The architect of Cuba’s Gulag was no less than Che Guevara, a figure lionized by some in the West, notes Carl Gershman, head of the National Endowment for Democracy. The real heroes of Cuba’s revolution against dictatorship were figures like Pedro Luis Boitel and Huber Matos, who remained true to democratic principles, he adds.

One would think that remittances – averaging perhaps as much as $3 billion annually – could help democracy in Cuba by financing civil society, note analysts Javier Corrales and James Loxton. But because poverty is rampant and financing scarce, most remittances get used for household consumption or self-employment activities, with very little left over for the sorts of civic groups that are indispensable for democracy to emerge, they write:

Given the failure of previous efforts, the United States should maintain or heighten pressure on Cuba for at least two reasons, adds Abrams, a board member of the National Endowment for Democracy: