Fake news is about to get worse, especially for investigators of human rights abuses, according to George Washington University’s Scott Edwards and Steven Livingston. Nearly anyone with a laptop and an Internet connection can now distort visual reality to offer exceptionally realistic — but utterly fake — photos and videos of events that did not occur, apparently perpetrated by people who were never there, they write for the Post’s Monkey Cage:

Using technology called “DeepFakes” (a portmanteau of computer neural network’s deep learning and fake), hobbyists can now transfer video images of one person’s face to video of another person’s body. This technology, also called Face2Face, has spawned a thriving, competitive community of amateurs creating clever mash-ups of people and faces …Another artificial intelligence technology called Generative Adversarial Networks makes it easy to fabricate faces, intricate cityscapes and anything else base on a sufficient number of photographs to “train” artificial neural networks — visually believable and utterly false. 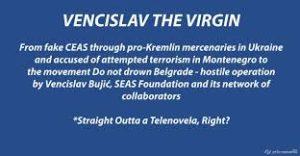 A new report by the Center for Euro-Atlantic Studies (CEAS ) -“VENCISLAV THE VIRGIN” – details fake news operations by pro-Kremlin mercenaries.” A recent Politico article on Serbia’s media landscape failed to mention that “the opposition is not much better than the government and actually welcome Russian influence too,” said Jelena Milic, director of the Belgrade-based CEAS. The government conducts an “open door policy” to Russian influence of all kinds, she added.

Today Faktograf* is part of the International Fact-Checking Network and a signatory to the fact-checkers’ code of principles that emphasizes commitment to nonpartisanship, fairness and transparency of sources worldwide. Faktograf, launched in October 2015, has made its presence known on the Balkan media scene.

According to Vidov, the website receives between 30,000 and 40,000 unique visitors each month and has a strong Facebook and Twitter presence. Faktograf’s findings are televised as part of a Sunday morning news show on the N1 network, a CNN affiliate for the region, and published by Croatian media outlets.

A deadly shopping-center fire in Russia’s Siberia region that killed at least 64 people has led to protests and criticisms of the government, notes the Alliance for Securing Democracy. Observations from the watch group “Nablyudateli” and other Russian internet users suggest that Kremlin-linked bots may be co-opting reports related to the fire in an effort to detract attention from government culpability — a reminder that the Kremlin’s disinformation tactics start at home against the Russian people.

The U.S. should consider busting fake news the European way, says Thomas Holt, Associate Professor of Criminal Justice at Michigan State University. A government effort to combat fake news would provide citizens with information about the scope of information warfare. It would also create a clearinghouse about fake news that can inform not only the public, but also government agencies and policy-makers, he notes:

The EU created a specialized task force in March 2015 to identify the Russian campaign’s strategies and expose them to the public. The East StratCom Task Force was formed by the European Council to provide information to the European Union and its member states on the extent of Russian disinformation campaigns. The task force publishes two weekly newsletters. The Disinformation Review is published every Tuesday to show the latest examples and trends in Russian trolling. …The Disinformation Digest is released every Friday.

*Faktograf is funded by grants from the National Endowment for Democracy and Google’s Digital News Initiative Innovation Fund.