UK Prime Minister Theresa May delivered her sharpest rebuke yet to the tech industry on Thursday, in a keynote address to the World Economic Forum that focused on the digital economy, The FT reports:

The prime minister’s speech was the latest salvo against the conduct of big Silicon Valley tech companies. Over the past year, Google, Amazon, Apple, Facebook, Twitter, Ebay, and Uber have faced criticism around the world for issues ranging from their tax arrangements and employment practices to their approaches for dealing with fake news, encryption and data privacy. …To coincide with the prime minister’s Davos address, the government on Thursday published a “digital charter” outlining its aims “to agree norms and rules for the online world”. It plans to look at sensitive issues such as the legal responsibility of social media companies for content on their platforms, fake news and the digital economy.

“Technology companies . . . simply cannot stand by while their platforms are used to facilitate child abuse, modern slavery or the spreading of terrorist and extremist content,” May said.

Her comments followed reports that the British government will launch a rapid response team to “identify and challenge disinformation” by monitoring social media for fake news. May’s spokesman said the “dedicated national security communications unit” would be charged with “combating disinformation by state actors and others,” the BBC adds. “We are living in an era of fake news and competing narratives,” he said.

“We will build on existing capabilities by creating a dedicated national security communications unit. This will be tasked with combating disinformation by state actors and others. It will more systematically deter our adversaries and help us deliver on national security priorities.” 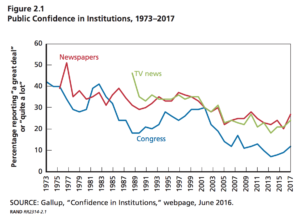 How does a shift toward online political activism and engagement affect democracy? That is one of the questions addressed in a 300-page report released last week by the global policy nonprofit RAND Corporation entitled “Truth Decay: An Initial Exploration of the Diminishing Role of Facts and Analysis in American Public Life” (above), which details a declining confidence in democratic institutions.

The report defines “truth decay” as a set of four related trends (of which fake news is only a little part) and offers lots of ideas for future research, notes analyst Laura Hazzard Owen. It’s focused on the United States, though “there is evidence that this phenomenon is also occurring elsewhere, especially in Western Europe,” she writes for Nieman Lab. Authors Jennifer Kavanagh and Michael D. Rich define truth decay as:

The authors look at three previous historical periods in depth (below), Owen adds, and find “the least evidence that previous periods considered in this report experienced the same eroding agreement about facts and analytical interpretations of those facts that appears to be occurring in contemporary society…this is an important distinction between the current period and previous eras.”

For sanctions against Russia to be an effective deterrent to counter disinformation they need to be credible and implementable, according to the Atlantic Council’s Daniel Fried [left, a board member of the National Endowment for Democracy] and Brian O’Toole, a nonresident senior fellow with the Atlantic Council’s Global Business and Economics Program.

“The Defending Elections from Threats by Establishing Redlines (DETER) Act of 2018, relies on the wrong trigger for action and its proposed sanctions risk unintended consequences, weakening its deterrence value. We applaud the initiative but there is a better way. Congress should draw from the Countering America’s Adversaries Through Sanctions Act (CAATSA) of 2017 to put in place more focused and effective sanctions in response to a new round of Russian interference,” they contend: 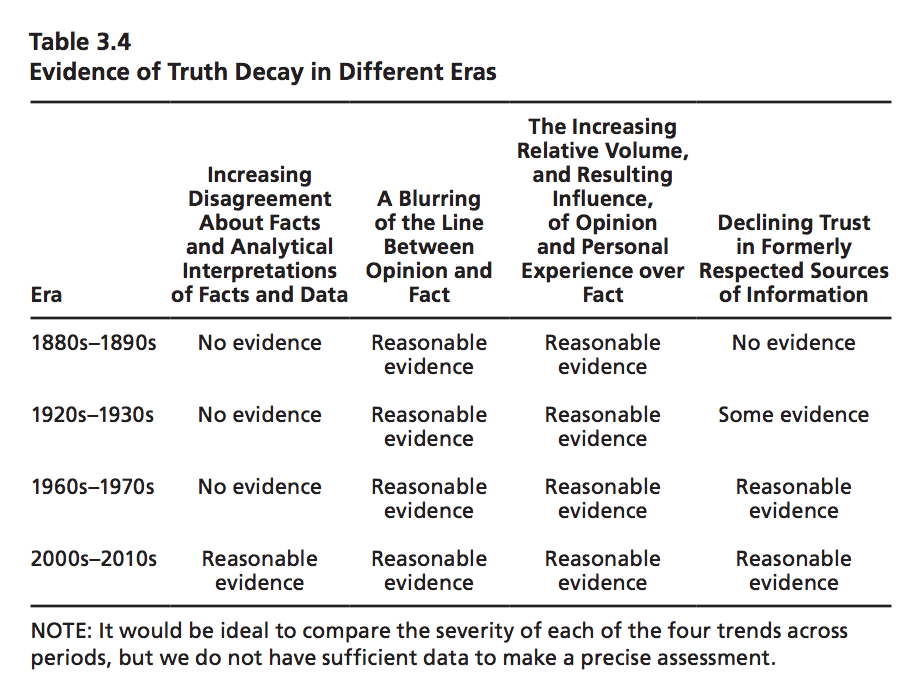