But Tunisia is one of 12 countries most dissatisfied with democracy, according to the Pew Research Center, including four – Mexico, Greece, Brazil and Spain – where eight-in-ten or more were dissatisfied, and another five where six-in-ten or more expressed dissatisfaction: Tunisia, Italy, South Africa, Argentina and Nigeria. Such levels of discontent explain why some observers view Tunisia’s democracy as enduring, but fragile.

In the run-up to this fall’s poll, Ennahda remains one of the country’s most important political parties, the Project on Middle East Democracy notes. In a new Expert Q&A, POMED Nonresident Senior Fellow Anne Wolf* discusses the past, 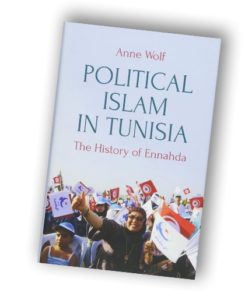 present, and future of the Ennahda movement, drawing on her book Political Islam in Tunisia: The History of Ennahda. Wolf refutes the myth of a secular Tunisia, discusses Ennahda’s mistakes and successes since the revolution, and warns that the threat of repression against the movement has not disappeared.

*Anne Wolf is Nonresident Senior Fellow at POMED [a partner of the National Endowment for Democracy], the Margaret Smith Research Fellow at Girton College, University of Cambridge, and an associate editor of the Journal of North African Studies.