Tunisia’s hopeful transition to a democratic future faces a new challenge. Voters in the country have delivered a sharp rebuke to their political elite. In the first round of presidential elections, held on Sept. 15, candidates from establishment parties performed poorly, among them Ennahda, the conservative Islamic party with the most seats in parliament, and Tahya Tounes, or Long Live Tunisia, the party of Youssef Chahed, the current prime minister, notes Rory McCarthy, the author of “Inside Tunisia’s al-Nahda: Between Politics and Preaching.”

Tunisia’s democratic transition appeared to benefit from pragmatism and consensus over the past eight years. The Tunisian National Dialogue Quartet, made up of four civil society groups, won the 2015 Nobel Peace Prize for successfully negotiating a way out of a grave political crisis two years earlier when the transition was close to collapse. Politicians went on to write a progressive constitution and to build an inclusive political system that gave space to both Islamists and their former adversaries from Mr. Ben Ali’s ousted regime, he writes for The New York Times:

Many Tunisians hope that this public rejection of the political elite will reset the system and revive the promises of the 2011 uprising for accountable, legitimate government and wider economic opportunities for all. But the risk is a slide toward authoritarian tendencies. …Another low turnout is likely in the coming parliamentary elections, and established parties are unlikely to dominate. A fragmented parliament may not be able to restrain an ambitious president. And it may struggle once again to agree on candidates for the constitutional court, which ought to be the final guarantor of Tunisia’s political transition. 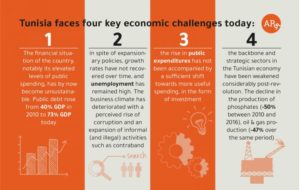 During its first years of transition to a democratic order, Tunisia’s efforts were predominantly focused on addressing political challenges, adds Ishac Diwan, Professor of Economics at Paris Sciences et Lettres and director of the newly established Observatory on the Political Economy of the Middle East and North Africa.

The performance of the country in this regard has been generally positive, as it has managed to consolidate democratic gains despite challenges related to the polarization of politics around identity and religious issues, the rise in insecurity related to attacks by extremist groups, and even the general disenchantment of voters for the existing political elites. However, the gains on the political front came at the expense of economic setbacks, he writes for the Arab Reform Initiative:

One of the main challenges for the coming period will thus be largely economic. High unemployment, unfulfilled demands for social justice, the rise in corruption, and most importantly in the short term, an unsustainable macroeconomic trajectory, all threaten to upset recent political gains. If the upcoming administration does not address them, social discontent would endanger the hard-won democratic gains. …..

Whether Tunisia will be able to escape a macroeconomic crisis remains very much a question mark. Whether a crisis occurs, or Tunisia is obliged to learn how to live for the next few years on “the edge of chaos”, the most important long-term determinant of success will be whether Tunisia has, in its character so to speak, what it takes to resist the maladies of contemporary democracies, which are entrenched cronyism and destructive populism. Both beasts are already showing up their ugly heads. RTWT 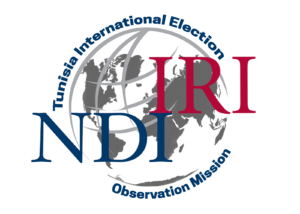 Tunisians were able to participate in the recent “well-administered election despite a shortened electoral timeline,” said election observers. However, unclear and unevenly enforced campaign regulations impeded voters’ ability to engage directly with candidates. The highly contested election was also conducted against a backdrop of economic stagnation and disappointment in the pace of reform, said the joint international Election Observation Mission of the International Republican Institute (IRI) and the National Democratic Institute (NDI) – both core partners of the National Endowment for Democracy.