The main error of liberal internationalism is that its advocates have mistaken an aspiration for reality, and by so doing have gotten a basic chunk of causality exactly backwards, argues Adam Garfinkle, the Founding Editor of The American Interest. International consensus, international law, and UN Security Council resolutions have not produced the post-World War II international order, and what remains of it today, he writes for the Foreign Policy Research Institute:

These are consequences, not causes, of an order produced by the advanced democracies of the West, led by the United States and girded by American power and reputation. In other words, these abstract nouns are epiphenomenal of more substantive realities, and it follows that if those substantive realities change so, eventually, will their downstream effluvia. Put another way, liberal internationalists get the ontology wrong.

The institutional sinews of the postwar liberal international order, their associated norms along with them, will surely weaken and decay in time unless the U.S. government suddenly switches direction and recovers the sense of its inner virtue, which is the sine qua non of an activist and liberal global policy, Garfinkle adds. The simulacrum of a global institutional order can persist for a while, ….. But with the European Union in profound and likely protracted disarray [there is] no other substitute for disinterested American verve imaginable. RTWT

For the last quarter century, safeguarded by the liberal international order and the United States as a liberal hegemon, the West optimistically saw the future as one of democratic peace. But it now appears as if we are moving into an age of nationalism and populism, two forces that threaten deeply held international norms. According to this thinking, the liberal international order is crumbling, NATO is moribund, and the United States is lost. In his new book, The World Needs the West (published in German so far), Thomas Kleine-Brockhoff argues this type of fatalism ignores the possibility of the failure of populism, underestimates the forces of opposition that nationalism creates, and has little regard for the forces of self-correction that are inherent in liberal 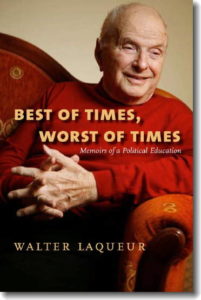 “The decline of the West would be less of a tragedy – history after all is a constant sequence of decline and fall and rise of powers and civilizations – if one could see other centers willing and able to replace them,” wrote the historian Walter Laqueur. “But with all the shortcomings of the Old World, it is difficult to see lux ex oriente. For me Tennyson’s words still ring true: ‘Better fifty years of Europe than a cycle of Cathay,’” he argued in Harvest of a Decade.

“I became a historian of the postwar era in Europe, but the Europe I knew no longer exists,” Laqueur told Der Spiegel.

“My book Out of the Ruins of Europe, published in 1970, ended with an optimistic assessment of the future. Later, in 2008, The Last Days of Europe: Epitaph for an Old Continent was published. I returned to the subject in my latest book, After the Fall: The End of the European Dream and the Decline of a Continent. The sequence of titles probably says it all.”

Why the world needs the West